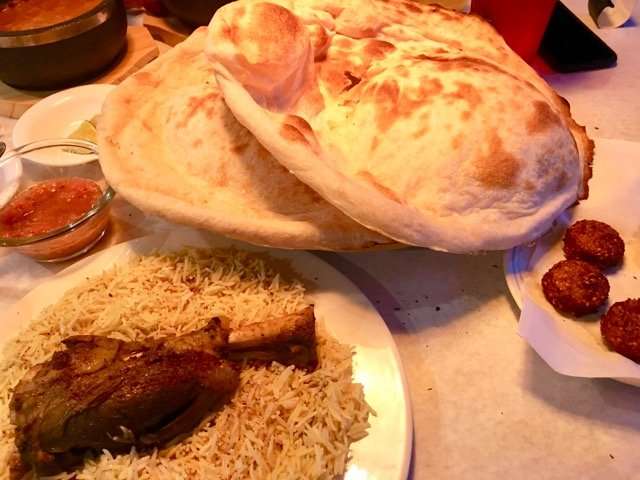 It might seem odd to visit Yemeni Kitchen, a Middle Eastern restaurant, during Ramadan, during which one of the more well-known observances involves fasting. But that’s only from sunrise to sundown.

And that explains the handwritten note on the front door of Yemeni Kitchen announcing the start of the evening’s buffet: precisely at 8:19, the official time of sunset. And not a moment sooner.

Unfortunately, my companion and I arrived about 45 minutes too soon for the buffet, although the restaurant was open to the public. Still, not surprisingly, it was largely empty of other customers.

We were greeted warmly by a very young man, perhaps in his teens. He led us to a booth that had a small dish of dates for us to nibble on while we looked over the menu.

After we placed our orders we were given bowls of Maraq, a lamb broth soup that is a traditional start to a Yemeni meal. The broth was rich and unctuous. Instead of the usual lemon wedge served with the soup, Yemeni Kitchen offers a dish of a tomato based condiment that would look right at home on the table of a Mexican restaurant. And just as spicy as a good salsa, too.

Our young server also brought us some malawah, or as described it with a wide smile, “the famous Yemeni bread!” Sort of a cross between naan and lavash and the size of a pizza platter, it had wonderful brown bubbles from baking and tore easily.

We of course had to have the Saltah, which is sort of a national dish of Yemen, though it has regional variations. Yemeni Kitchen’s has a lamb broth base, though no meat within. Instead, it had various vegetables, including okra, and was accompanied by whipped fenugreek that is meant to be stirred into the broth. It was served in a traditional clay bowl and, as promised on the menu, very hot. So much so that it was still bubbling.

So was the Foul, which we had ordered as one of the starters. It was also in a clay pot and consisted of mashed fava beans mixed with onions and tomatoes. Once it had cooled enough to handle, it was delicious with the bread.

The kitchen was out of Mandi, another popular dish of Yemen and other countries in the region. So I settled for Lamb Haneed, which is similar. It featured a lamb shank roasted in a tandoor and served on rice. The meat was tender and had wonderful spicing.

Needless to say, alcohol is not available.

By the time we had finished our meal, people were starting to arrive, though the break-fasting time was still a good 15 minutes away.

If you’re the type who likes to experience the culture and cuisine of many countries, I would recommend a visit to Yemeni Kitchen.