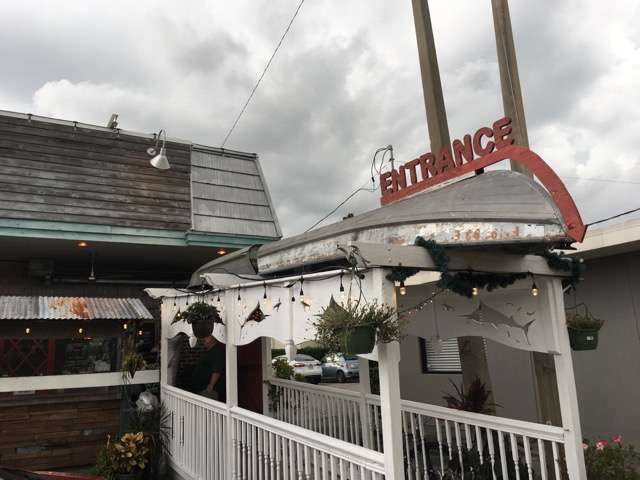 I hadn’t visited the Winter Park Fish Company since it opened more than eight and a half years ago. Opening chef George Vogelbacher left the business a few years ago to cook at Maxine’s on Shine. There have been lots of other changes, here and around the neighborhood (who remembers that O’boys was just up the block in the building where Ravenous Pig is now — and where Vogelbacher’s Le Cordon Bleu restaurant was for many years?).

I figured it was time to go back and check it out.

When it first opened, Winter Park Fish Company was a fast-casual restaurant. People stood in a line that often snaked out the door, ordered their food at the counter once they made it inside, then took a table stand with a number and hunted for a table to wait for their order.

You may still find a line today, but it’s more likely people waiting for a host to acknowledge them and to find them a table — it’s full-service now — probably with the curt phrase, “Inside, outside or first available?” (Remember when it was “smoking, non or first available?)

There have been changes to the menu since I last visited, though, of course, it’s still seafood centric. I did notice that there is no longer an item called Bob Morris Conch Fritters. I shouldn’t be surprised; there hasn’t been any fresh Morris available locally for years.

I chose a cup of the Boston Clam Chowder for a starter. It wasn’t overly thick but it had a floury taste that usually accompanies a denser stew. There were a few chewy bits of clam but there was a more prominent flavor from what appeared to be bacon.

For my main dish I had the Fish and Chips, a dish I had enjoyed when the restaurant first opened. This one not so much. Instead of a battered fillet, it featured what could only be described as fish nuggets, which were about the same size and shape as the accompanying hush puppies. The batter did not flatter the fish. The chips were unremarkable.

My friend had the Classic Fish Tacos (there are eight taco variations). There was an impressive amount of fish in the flour tortillas, which bore grill marks but were cool to the touch. And there was just a complete lack of any distinguishable spices. Even the cheddar cheese that topped the tacos was bland.

Service was affable and the food came out swiftly.

There have been other changes in the neighborhood, including some new seafood restaurants. Winter Park Fish Company will have to step up its quality if it wants to stay in the game.