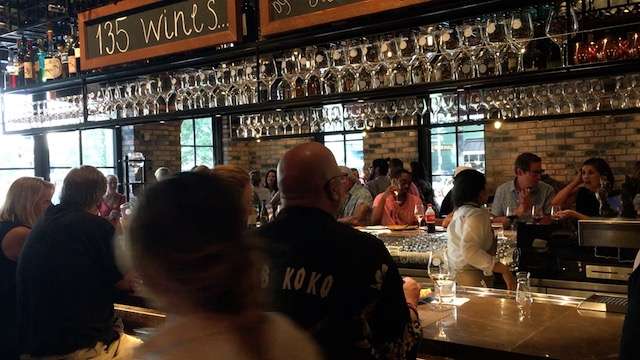 This is not your average wine bar. But then knowing George Miliotes, no one would have expected it to be.

Miliotes is the George of Wine Bar George, the latest venue to spring up at Disney Springs. It’s big, situated in a newly constructed two-level building with a balcony overlooking the walkway below and part of the lagoon just beyond.

Wine, of course, is the main draw here, and the list, personally curated by Miliotes, is extensive and varied. He wisely included popular names, go-to wines that people order out of habit or because they’re intimidated by some of the more obscure names.

But if Miliotes gets to those people before they place their order, chances are they’re going to be trying something they’ve never heard of. And in all likelihood, they’ll have a new favorite wine.

That’s what Miliotes does. One of fewer than 300 certified master sommeliers in the world, he is also a confirmed wine geek. He takes unmitigated joy in wine pairing — that is, matching a person with the perfect wine.

There is food at Wine Bar George to be paired with wine, too, though the menu is a bit unconventional. There is a section called Small Plates with 10 or so entries, from hummus and olives to meatballs and pork cheeks. There are also the obligatory wine bar mainstays of artisanal cheeses and charcuterie boards.

But then it jumps to a section called Family Style Plates with only a few options but each meant to feed more than one person.

I suppose it’s a way to indicate that this is, like the name says, a wine bar and not a full restaurant. But it would seem to underutilize the kitchen that was included in the construction as well as the services of the very capable executive chef, Ron Rupert.

I liked everything I tasted, including the Charcuterie Board and Crispy Mac & Cheese Bites from a preview visit and House-made Meatballs and Porchetta Spiced Pork Cheeks that I sampled after the opening. The latter two were both served with the same triple cheese polenta. It was good, but some variation would have been nice.

But wine is the forte here, and it’s great that every selection on the considerable wine list is available by the glass or by the bottle. Some are even available by the ounce, thanks to the Coravin wine system that allows extracting a pour from an expensive bottle without removing the cork or introducing oxygen to the wine.

That might be your choice if you choose to order the ’88 Chateau Margaux, which costs $84 for an ounce. That’s a lot, but it allows you to experience the wine without laying out 500 bucks for the whole bottle.

Most locals are familiar with Miliotes, but I saw nothing at the wine bar that would tell tourists about his background and his achievement as a sommelier. You’d think that would be a selling point, but its absence is typical for the modest Miliotes.

I guess visitors will just know him as a guy named George who runs the place, and runs all over the place, and who is always willing to stop at a table and talk about wine.