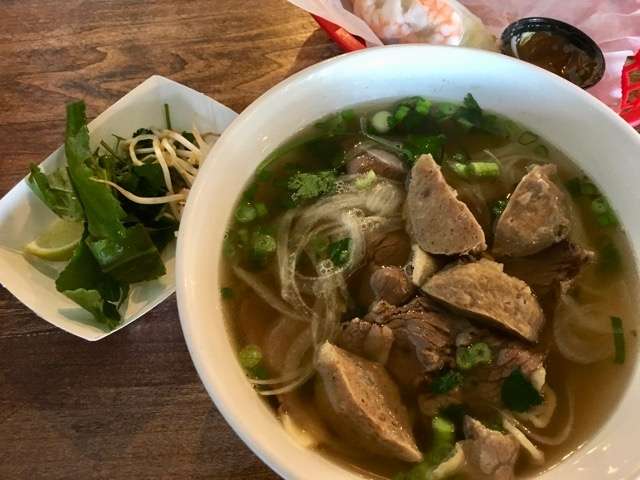 Let me just put this right out there at the beginning: Viet-Nomz might just be serving the best Vietnamese food in the area. Those of you who know me know that I don’t make such statements lightly.

It’s a bit of a silly name — the Nomz part is for nom nom, which people type in a message when they want to affect chewing sounds. Don’t look at me, I just report these things.

The menu here is less confusing than most Vietnamese restaurants, which often have more than 100 types of soup, rice and noodle dishes, though the actual options may even be more numerous here.

That’s because Viet-Nomz’s concept is a variation of an assemblage operation. That is, you choose whether you want pho, the soup most Americans pronounce “foh,” rice or noodles, then the type of base. For example, if you want soup you choose a beef, chicken or vegetarian broth, then you choose two meats or vegetarian options to go in it. If you want you can add protein for a couple of bucks more.

But before you do that you should know that the two basic options will probably be enough. I selected beef soup with brisket and beef balls and I don’t think I’ve ever been served a pho with so much meat. The beef balls were especially big and dense. And the noodles were long and al dente, the broth flavorful.

And here’s a brilliant idea: Instead of serving the pho with a plate of the usual accouterments that you may or may not want to add to your soup, Viet-Nomz offers a help-yourself condiment bar so you can take only what you want. And they’re all nicely labled, too, so you can tell the difference between the Vietnamese basil and the culantro.

And it wasn’t just the pho that was impressive. The Summer Rolls were so thick and full of not just noodles but also pork and shrimp that they were almost too big to put in my mouth. (I managed.) Fresh tasting and crisp.

The experience was an absolute joy from beginning to end. It’s a very smooth operation. So much so, in fact, that I wondered if the owners have franchising in mind. They should, because Viet-Nomz is definitely a winning concept.