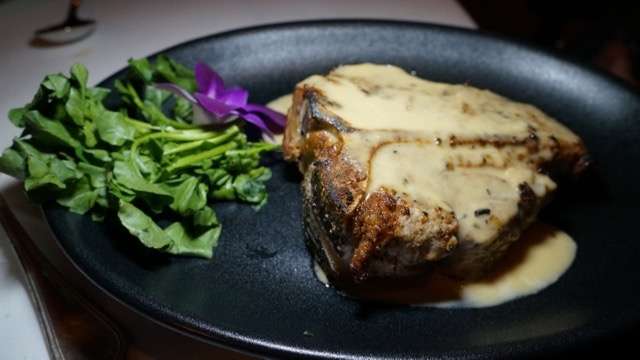 Breathe a sigh of relief.

If you were concerned, as I was, that the recent rebranding of the Venetian Room to the Venetian Chop House would mean that Orlando was losing yet another fine dining venue you can relax.

The signature restaurant at the Caribe Royale is still an elegant dining room, the service is still first rate, and, perhaps most importantly, the food is as high quality and as well prepared as ever.

In fact, except for some tweaks to the menu, you’d be hard pressed to find any substantive changes.

My guest and I began with appetizers of Lump Crab Cake and Gnocchi Stroganoff.

Both were exceptional. The crab cake was thick and full of sweet meat.

The gnocchi starter was more like an entree. The doughy little dumplings were tossed with a creamy sauce of Cognac and pearl onions with a bit of truffle shavings. On top were slices of filet of beef, cooked to the requested medium rare. I could have happily filled up on this alone.

But entrees called. My guest chose the Veal Chop (it’s called a chop house, after all). It was a beautifully tender chop topped with buttery hollandaise.

I had the Bison Short Ribs, tender but impressively large hunks of meat resting atop the bones they’d fallen off of. Onion jam, infused with the natural juices from the meat, topped the ribs.

A highlight of dessert was the passion fruit souffle, an impossibly light and creamy confection with a burst of fruity flavors.

The staff were as polished and professional as ever, an absolute delight.

Even for those who aren’t drawn to a steakhouse concept will find other items, including several seafood selections.

And rest assured it will all be prepared expertly, served with deftness, and enjoyed in what is still one of Orlando’s finest dining rooms.