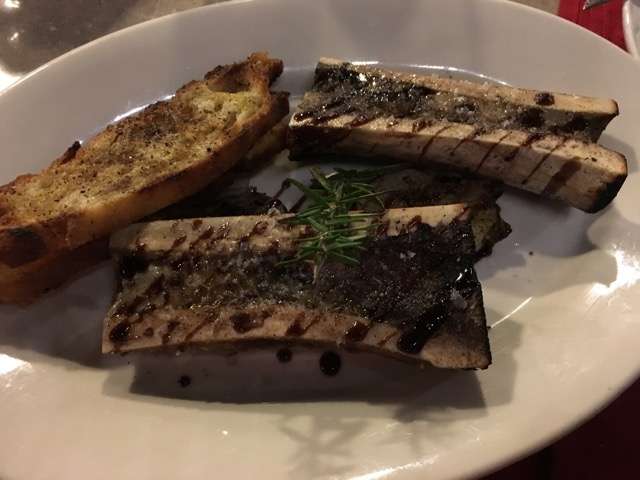 When it opened, just over two years ago, Txokos Basque Kitchen was one of the most anticipated new restaurants of 2014 (partly because it was expected to open in 2013). It was the first inland project by respected New Smyrna Beach restaurateurs Michele Salgado of Spanish River Grille and her husband, the James Beard Award nominated chef Henry Salgado.

And despite a confusing tongue-twister of a name and a focus on the cuisine of Spain’s Basque region, it became a hit.

Then, in September of 2015, the Salgados sold the restaurant, saying at the time that they wanted to focus on their first restaurant and new projects in New Smyrna Beach.

And in the few short months since that sale, Txokos has been sold again. So I stopped in to see how it is doing.

The food, it must be said, is every bit as good as it was before. I was glad to see that Bone Marrow is still on the menu, and the canoe-cut shanks were perfectly roasted and sprinkled with sea salt and a hint of rosemary.

Grilled Octopus, too, was nicely done, the curling tentacles placed upon platforms of al dente potatoes and topped with grilled onions.

The hamburguesa, when it finally arrived after a curiously long wait, was very good. The patty was thick, sufficiently juicy, though not to the extent that it was oozing, with a terrific charred crust. The menu said the meat was locally sourced, but the distributor named said it did not supply ground beef to any local restaurants. Pork belly was also included in the blend.

Why Txokos has fewer patrons is curious. The reputation of the Salgados undoubtedly brought foodie fans in. But those same people should be just as eager to continue to support a local restaurant that still offers a nice dining experience.