Spotlight: Too Much Sauce 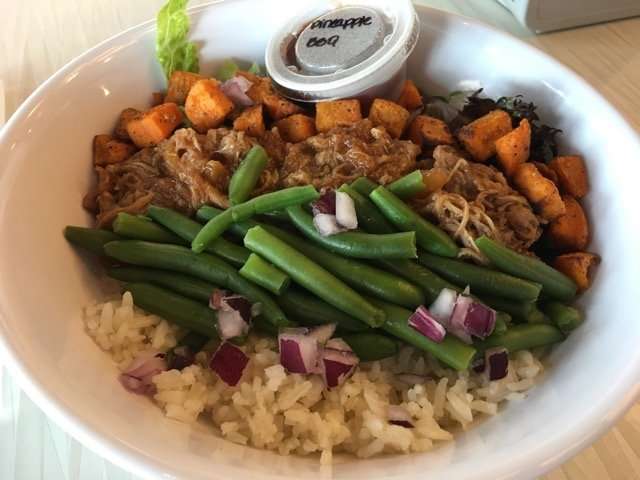 I cringed just a little when I first heard about a new place called Too Much Sauce, not because of the name, which is indeed cringe worthy, but because it is yet another in the long line of assemblage restaurants. maybe it wasn’t a cringe; it might have been an eye roll. I definitely sighed.

But I found this new restaurant in the Mills 50 district to be absolutely charming and much less annoying than the average choose-from-each-column concept. And, not incidentally, the food was good.

Even better, there are several preordained bowls that require no hand-wringing order choices. And for those who do wish to call the shots, the bowls are constructed in the back, so you aren’t forced to shuffle along an assembly line and watch your food being built.

As I approached the counter to place my order, I was greeted by a man who did not say, “Welcome” or “May I take your order?” but rather, “Let’s have some good food!”

I was so disarmed that I didn’t give the reply that I ordinarily might have given — I plan to dine alone, thanks — but instead took a beat and said, “Yes, let’s.”

From the list of Signature Bowls, I chose the Luau Pork, which features white rice and shredded roast pork with green beans and cubes of sweet potatoes that I initially mistook for croutons. It came with a plastic ramekin of pineapple barbecue sauce, and despite the name of the place, not an awful lot of it.

But after my food was delivered to my table, the server told me that I could find additional sauces over by one of the windows. There were about 10 of them, ranging from mild to very hot, with small paper cups to squeeze the sauces into and a wooden paddle, similar to those used in ale houses to present flights of beers, to carry the sauces back to your table.

I added a little of one of the hotter sauces to offset the relative sweetness of the pineapple barbecue. It seemed like an odd mix of ingredients, especially the salad greens, but I enjoyed it.

The space is quite pleasant, and bigger than I expected it to be. I did not visit this address when it was occupied by Giraffas, the Brazilian chain, but apparently neither did a lot of people, seeing as it closed after a short time. TMS’s interior is bright and spiffy, with touches of stacked bricks and red tile walls and comfortable tables to eat at. If you choose to dine in, your food is served in a melamine-like bowl, which is better than cardboard.

The food here is fast and, as advertised, good.