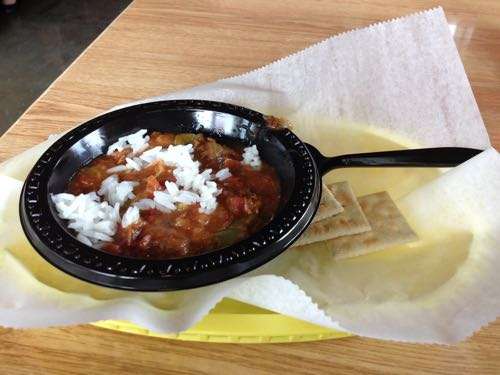 Here’s what you need to know about TJ’s Seafood Shack: gumbo.

Well, OK, there are some other things you should know about it, such as that it’s a fast-casual restaurant (that means you order at the counter, then take a seat and wait for someone to bring you your food.) It’s on the east side of town, with a location in Oviedo and another on East Colonial Drive, which is the one I visited. It’s in a Publix-anchored strip mall and occupies a corner space, with shacked-out decor and a typical wharffy ambience.

The menu is a Top 40 list of fish camp favorites, such as catfish, crab cakes, fried oysters and such. A special the day that I visited was the mahi mahi, which I ordered blackened, even though I knew that would be a mistake. There wasn’t anything wrong with the fish itself, in fact it was a perfectly fine fillet. But like too many places, the “blackened” fish meant little more than some blackening seasonings added to the fish. I should have had it grilled.

But the appropriately named Yumbo Gumbo did not disappoint in the least. It was a well seasoned bowl of rouxy darkness with big chunks of spicy andouille sausage and chicken, though, oddly enough given that this is a seafood shack, no seafood. None was needed. I’d gladly return to TJ’s just for another bowl. The soup was served with some nicely fried hush puppies.

The staff made the visit extra pleasant, from the friendly and welcoming greeting I received when I first walked in, to the prompt delivery of my food. And with most entrees on the menu priced below 10 bucks, TJ’s makes for a cheap date.