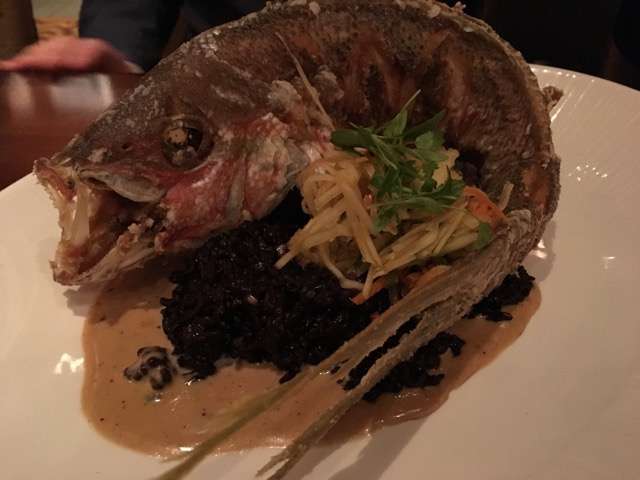 When I think about the top tier restaurants at Walt Disney World Resorts I usually think of Flying Fish, Citricos and California Grill, though the latter has declined somewhat in terms of experience.

What those restaurants have in common is that they are accessible without the requirement to purchase a ticket to one of the theme parks. Which is not to say there aren’t good restaurants inside the parks. Certainly Hollywood Brown Derby at Disney’s Hollywood Studios and Monsieur Paul at Epcot’s France pavilion offer a higher standard than a basic meal.

In that category of restaurants I now include Tiffins, a surprisingly adventurous and slightly upscale restaurant appropriately located inside Animal Kingdom.

What does it say that two of the top sellers at Tiffins are Charred Octopus and Whole-fried Sustainable Fish? The whole fish is an impressive presentation, the body frozen in an undulating swim pose on the plate, head and tail intact. Such a sight would previously have sent most guests screaming to the nearest burger joint or steak and potatoes restaurant. (There’s a reason that Le Cellier, the Canada steakhouse at Epcot, is so popular.) Here, the sight of the fish at the next table seems to encourage others to choose it. And, by the way, it is well executed and quite delicious, especially with the fermented black bean sauce and green papaya slaw.

The Charred Octopus appetizer was good, too, served on olive tapenade with romesco sauce and dots of squid ink aioli.

For my main course I chose the Berbere Spice-rubbed Venison, beautiful medium rare thick medallions with English peas and pea tendrils with a bit of spicy vinaigrette.

One of my hosts chose the Snake River Farms Wagyu Eye of Ribeye, sufficiently tender and accompanied by cauliflower of different colors, bacon-sherry vinaigrette and Amarula liqueur.

Crispy Corn Cake was perfectly crisped, served with a variety of vegetables and topped with the South African relish known as chakalaka. And I mention it here only because I wanted to say chakalaka.

The highlight of the dessert sampler we were offered was the Whipped Cheesecake, with Amarula panna cotta, piped in a squiggle onto the plate. I would like all my cheesecakes to be served this way from now on, thank you.

Although Tiffins is a fairly large restaurant it is divided into various rooms, each with its own themed decor.

By the way, be sure to also include the Pandora ride in your visit. It’s an incredible multi-sensory experience. But do it BEFORE dinner. Trust me on this.