Spotlight: The Pie In College Park 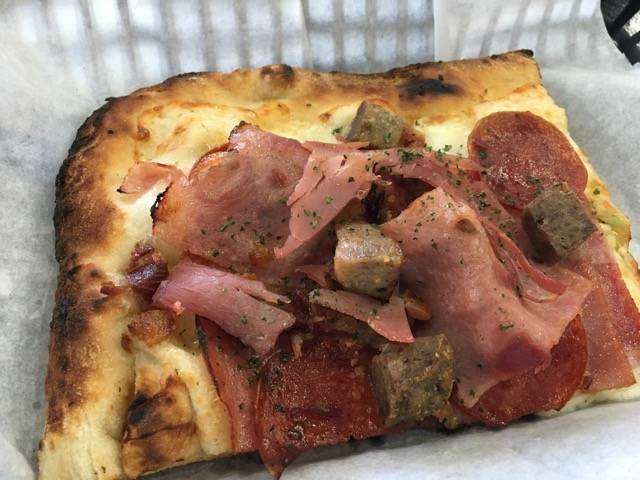 The Pie is the simplistic name for a new pizza joint in College Park. But the pizza here is different from your average pie.

It’s pizza al taglio, which, according to a large sign on the wall inside the restaurant, is “Italian for pizza by the slice or ‘by the cut.’” The word taglio translates to shear, so sort of a cut.

It’s also made in rectangular pans and sold by the slice. This is a common type of pizza that you’d find in Rome and is sometimes sold by weight.

Luckily that’s not the case with The Pie because given the toppings that were on the slice I had I would have paid extra euros.

My cut had ham, salami, sausage — all the things I love on a pizza. Nicely seasoned, minimal sauce, and a platform that was not too thick and not too thin.

I hesitated to use the word crust just then because I’m making a distinction between the bottom of the pizza and the sides. Because this type of pizza is made in a rectangular pan, the slice has more crust. That will be a negative to those of you who eat your pizza down to the “bready” end and then discard it like a denuded rib bone. But it’s a plus to people who order a pizza and get a side of bread to go with it. I’m not in the latter group, but I do eat my crust when it tastes good, and the crust here tastes good.

And usually a slice of pizza is all I need — no garlic knots or anything else. But for some reason I went for the deal that added a salad to my order, and I liked the salad almost as much as the pizza. The lettuce was fresh, the plum tomatoes burst with juicy tang, the balsamic dressing didn’t overwhelm, and the sprinkling of cheese made it all the better. A pretty salad, too.

Nice people here, as well. Friendly, accommodating and attentive, especially considering it’s a quick-serve operation. (It’s this sort of place that I most regret being asked to leave a tip when I pay for the food but before I receive the good service.)

College Park is getting well pizza’d, from our friends at Raggazi’s to Tornatore’s to Armando’s. But there’s always room for more.