Spotlight: The Saga Of Orlando Artist SKIP And His Giant Cardboard Banana 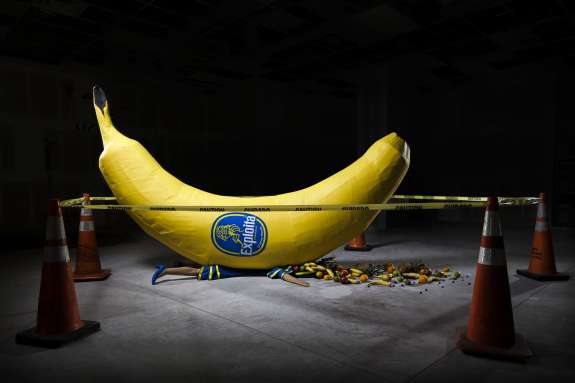 On this edition of “Spotlight,” a story about a local artist and his giant cardboard banana sculpture that has mass appeal. (Or, a-peel. Yep, we went there.) Justin Skipper, known to the art community as SKIP, spoke about the creation of the nearly 20-foot fruit, how it went missing then was found, and where it might, well, slip off to next.

“This banana is crushing the Chiquita banana lady that is underneath it in a very Wizard of Oz style with the arms and legs kind of like sticking out underneath it, the hat is carrying the fruit has been spilled out everywhere,” said SKIP.

The banana had a Chiquita-style sticker on it that said “Exploita,” a nod to the artwork’s Spanish-language name which translates to “Exploit The Third World.” The piece was a social commentary on the fruit industry, according to SKIP. After the show, it started raining while the banana was on a truck in transport. So, SKIP and his friend stopped and wound up leaving it under a pavilion at a park. Waiting out the relentless rain had made SKIP dangerously close to being late for work, you see.

Then, the banana went missing.

The banana was found by a family coincidentally planning a Minions-themed party. Hear the whole story, including how the banana will be making another public appearance, by clicking the player above!