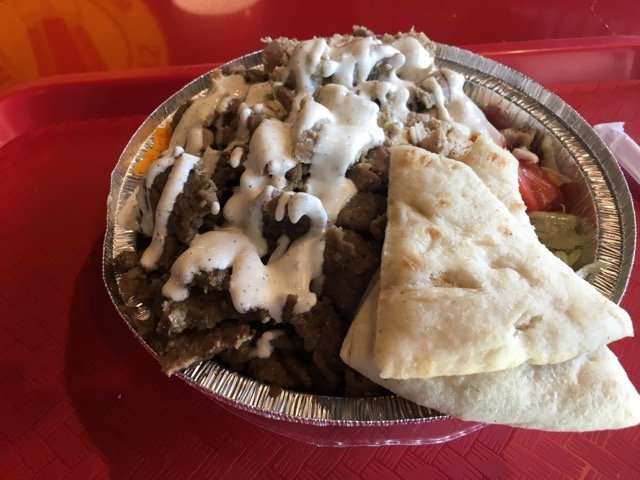 If you’ve ever been to New York City and wandered around the around the area of 6th Avenue and West 53rd Street — and as a tourist, there’s a pretty good chance you have since it’s in the area of Rockefeller Center and the corner that the New York Hilton is on — you’ve undoubtedly seen an omnipresent food stand there where meats and onions are cooked on a griddle day and night and mounded in a corner of the hot surface awaiting customers.

You may have even ordered a pita sandwich there. I did, many, many years ago, on one of my early visits to the city, while attending a convention, at the Hilton, in fact, in the days before I became a food writer. It was convenient, and cheap, especially for New York, and for someone unfamiliar with the city an easy and unintimidating choice.

I’m sure at the time I thought I was experiencing real New York food.

I have been to New York perhaps 75 times since, and I’ve passed the same cart probably hundreds of times. I’ve never once felt the need the order food from it again.

So I was somewhat bemused when I heard that the cart-based business, which became known as The Halal Guys, was franchising into brick-and-mortar locations beyond the world of Manhattan. And I had to scratch my head at the excitement that was stirred when it was announced the Guys — or someone who had paid a fee to be known as a Guy — would open in Central Florida.

That location, which I assume will be the first of several for the area, is in the Waterford Lakes district. It is staffed mostly by Halal Gals, mostly unsmiling and severe, who dish up the food into aluminum pie plates.

Like on the streets of New York, the menu is simple. Chicken, gyro meat or falafel, in pita bread or on the plate.

You get a couple of scoops of yellow, almost orange rice, some chopped lettuce with tomatoes, and your meat — a combo of chicken and gyro is offered — then squirts of the sauce of your choice. The standard Halal Guys sauce is called simply white sauce. It’s soy based and doesn’t come close to having any flavor. It is appropriately named.

I was proffered some doughy pita triangles, too small to use as meat conveyances.

It was all just rather OK.

Which makes sense, because it was missing one major ingredient: New York City.

Sitting in a squeaky clean dining area in a Florida strip mall isn’t the same as finding a ledge or a fountain wall to perch on in front of a skyscraper. Maybe if they turned off the air conditioning and piped in some diesel fumes. But if you really want to experience the Halal Guys, pay a little extra — about $159 on Jet Blue plus a $45 cab ride to Midtown. Splurge for a side order of hummus and a room at the Hilton.