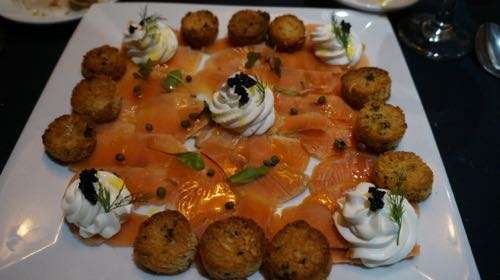 The Golden Knife bills itself as a chop house. Its menu is light on appetizers, unless you consider salads to be starter course material. My eyes were drawn to an octopus option, until I also saw that the price was $20, which was the same as some of the entrees.

So I settled on the Marinate Lax Salmon for me and my guests to nibble on. The menu said it was prepared with citrus and vodka, but there was no indication that anything but salt had been used. And, it had apparently been left on the cure for too long. A saliva sucking saltiness filled the mouth, and the texture had been reduced to leather. Or as one of my guests said, “This is like salmon jerky.”

Things weren’t as disastrous with the entrees. Indeed they were all perfectly acceptable, if not wonderful.

The lamb rack offered nothing new to the genre except that the nicely cooked and tender chops were served with a yummy yucca mash.

Golden duck was disappointing. It was overcooked and dry (odd since the menu specifies that it is prepared sous vide, which should reduce the chance of overcooking). The leg was coated with an almond crust and plopped atop a pumpkin puree.

You might expect an item named “One Great Chicken” would offer something more than a simple breast served with mashed potatoes. Kudos to the marketing team, but a more truthful menu would list it as one simple chicken breast.

The pappardelle lamb featured a hearty ragout that might have soared with a bit of attention to the seasoning. But even as it was, it was arguably the best of the entrees sampled.

Downtown Orlando is undergoing a renaissance. We’re going to need more good restaurants there. Golden Knife needs to make major changes if it wants to be included.