Spotlight: The Edison At Disney Springs 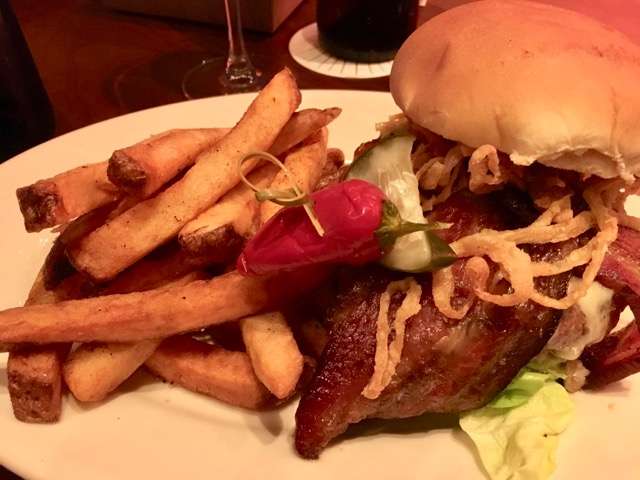 The Edison at Disney Springs is a multilevel fun factory of a restaurant with good food to go with the entertaining decor.

Thomas Alva is the Edison of the name, of course, and there are homages to his inventions and patents everywhere. Indeed, the very design of the restaurant is an old power plant.

Apparently he had something to do with inventing bacon, too, given its near ubiquitousness on the menu.

That includes an appetizer called the DB Clothesline Candied Bacon, with long rashers of bacon clipped, for some reason, with clothespins to a rod suspended between two tall poles. (The clothespin was not an Edison). The bacon, thick and chewy, was slathered with sticky maple syrup and dotted with cracked peppercorns. I found it a bit sweet for a starter but I loved the leftovers with my eggs the next morning.

(I do wonder if the sweet bacon referenced a job Edison had as a boy, one of the lads hawking confections on trains who were known as candy butchers. If so, kudos on the research, people.)

Bacon had a dominant presence on the burger known as The Edison. Here it was draped over a thick patty fashioned out of sirloin steak, shortrib and brisket meat, grilled to a requested medium-rare juiciness. Good burger.

The meatloaf was served, as meatloaves should be, with mashed potatoes. The texture was tender-firm and a spicy ketchup glaze added a piquant note to counter the rich reduction gravy. Oh, I almost forgot — the meatloaf was swathed with bacon.

Later in the evenings the restaurant takes on more of a cabaret setting (adults only) with acrobatic aerialists, live music and dancing.

Even without the live entertainment, The Edison, which is a sponsor of ScottJosephOrlando.com, is a fun place to be. Having good food to go with the experience makes it even better.