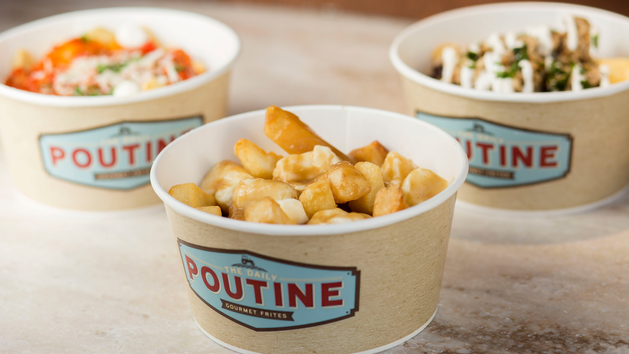 Before we discuss the Daily Poutine, I feel I should mention that there is no one anywhere who under any circumstances whatsoever would recommend that poutine be a consumed daily.

In its simple and original form, poutine consists of french fries with fresh cheddar cheese curds and brown gravy. Dr. Pritikin would not approve.

The Daily Poutine, at Disney Springs, offers four different varieties of poutines, something that should enrage Canadians, if Canadians ever got enraged. If you take fries and put melted mozzarella on them and douse it all with Bolognese sauce, you might have something but it is not Italian Poutine.

And while I disagree with the flavor varieties I also must question why a place calling itself the Daily Poutine wouldn’t offer seven.

I might also be more amenable to the variations if they could do the classic version correctly, but sadly the one I ordered fell way short.

The fries, though the appropriate thickness (think Lincoln Log) were dry. The beef gravy was fine —not overly beefy — but the cheese curds were too cold and did not squeak when bitten, which probably means they weren’t fresh.

That didn’t stop people from lining up at the new kiosk, which prompted a man nearby to turn to me and ask, “They’re just fries, right?”

When done right, poutine can be a guilty pleasure to enjoy occasionally, but certainly not daily. But Semi-Annual Poutine doesn’t have the same ring.