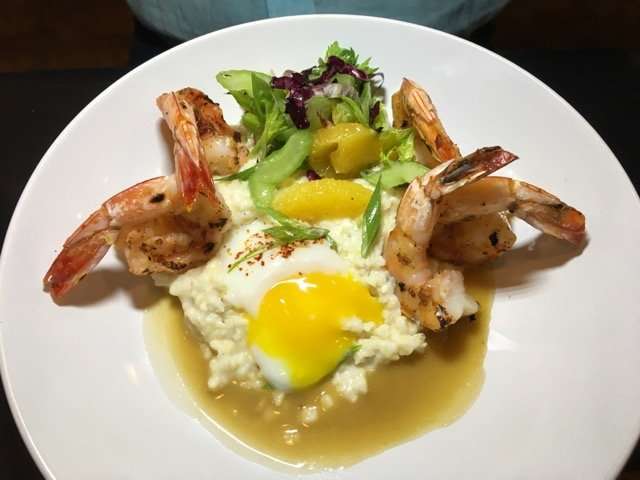 Within just a couple of minutes of my arrival, I learned that the chef at Tennessee Truffle is a culinary genius.

It wasn’t because of anything I’d eaten or tasted. It was because my server told me so after I said it was my first time there.

I’m not sure Mensa has a special test just for chefs. Or if chef Nat Russell would qualify. But I do know that some very clever choices have been made with the menu.

The smartest is the way he’s freshened up his shrimp and grits, which has now officially become the most prevalent and overdone entree on Central Florida menus. But Russell’s Everglades Shrimp & Grits seems new. He uses good-sized shrimp for starters, nicely grilled with a charred crust on the tail shell. And pebbly Anson Mills Antebellum grits, which sit in a cuisson of juices from shrimp and oranges. But Russell delivers the dish along with an egg cooked sous vide for the diner to crack open and season. He then scoops up the egg and deposit it onto the grits and breaking the yolk so the rich yellow oozed out. It made for a beautiful plate, and a fun and different take on a trite dish. I should also mention that it was all delicious.

I wanted something a little more interactive with my Maple Leaf Duck Confit entree. It was prettily presented, though a bit on the dry side.

Baby Octopus Mopped in Sorghum featured bits of tentacles with a peanut romesco and crunchy farro. The octopus might have been firmer, but it was an interesting starter.

Southern Panzanella featured a timbale of creamy panna cotta infused with goat cheese, and a salad of fresh peaches, heirloom tomatoes and spicy arugula, with crumbles of pumpernickel “dust.” A cool summer salad.

Service was fine and friendly. And no, I didn’t mind that my server touted the culinary genius of the chef. In fact, I wish more servers had reason to be proud of the food they server. Serving food becomes a lot easier when you believe in the quality of what you’re serving. And there’s plenty to believe in here.