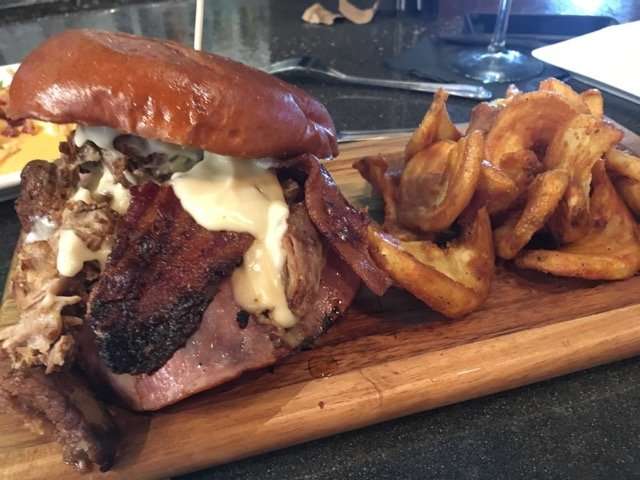 You’d be hard pressed to find any evidence that RanGetsu once occupied the space in Maitland that Teak Neighborhood Grill now calls home. Or second home, as it were — the MetroWest mainstay recently opened a second restaurant in the Village of Lake Lily apartments building.

Teak is known for its burgers, with 17 or so on the menu. (There’s supposedly a super-secret password-only burger menu, too, but I find the very notion annoying.)

And there’s good reason that burgers are the forte here: They’re very good quality, creatively accoutered, impressively large and just generally pretty damn good. And with most of them priced at $12 or $13, they’re also a terrific food value.

On my recent visit, a friend ordered the Pig burger, which had smoked ham, bacon and pulled pork on top of the thick half-pound patty. There were enough pork products to make a separate sandwich, and a really big one, at that. The bacon rashers were especially thick and tasty. There was a glop of some melted cheese, and it was all served on a fresh bun.

If you need any further proof that Teak is known for its burger, order the French Dip 2.0, as I did. The 2.0 designation would suggest an improvement from a regular French Dip, but this one might as well have been the beta version. Thinly sliced meat covered with melted provolone cheese on baguettes, served open faced and meant to be eaten with fork and knife. As plain as the burger was elaborate.

The appetizer of Loaded Pierogies featured dumplings that no Polish cook would recognize. They were tossed in sour cream, topped with a sort of Alfredo sauce and sprinkled with bacon and french fried onions. Loaded indeed. And actually, kind of a guilty pleasure. Think of it as Polish nachos.

The atmosphere is full-on tavern and sports bar. It’s boisterous — a guitar-singer in the front of the house could barely be heard over the din of diners. There are numerous large-screen TVs about the place. One in my line of view featured some sort of mixed martial arts competition. Nothing quite like sweaty men kicking each other in the head to spark an appetite for ground beef.