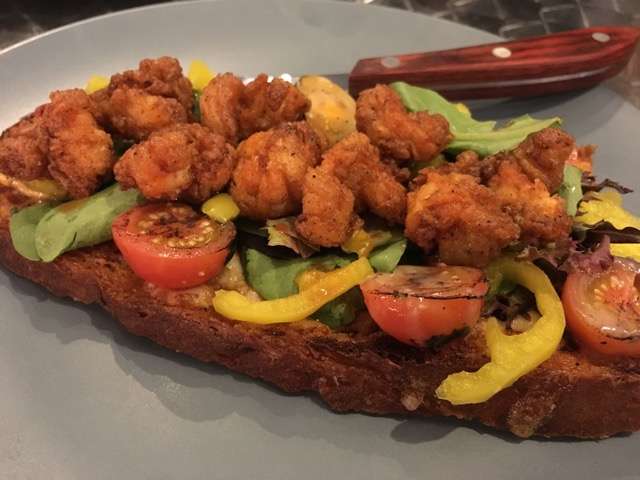 How could I not order something called a Tallow Candle? Tallow is a more lyrical name for lard, and the very thought of it whisked me back to a bar in Firenze that listed lardo as one its bar snacks. And it was just what it promised: little chunks of lard to put on a cracker or slice of bread. With each bite it was like saying, “Here it comes, arteries; deal with it.”

A Tallow Candle, as presented at Tartine in College Park, sounded like a more inventive presentation. And it was. Essentially, the tallow was in the form of a tealight with a lighted wick that was to melt the lard into a spreadable goo. Unfortunately, unless you’re willing to wait a long time, the flame is insufficient to melt the lard. And it wasn’t really worth the wait. But I appreciated the effort.

The Oeuf Cocotte, on the other hand, was wonderful. And the gooey soft barely-boiled egg in the gruyere-laced bechamel offered immediate gratification. It was delicious, tinged with just a touch of truffle, spooned on the toast points.

As you might expect from the name of the restaurant, tartines, the French open-faced sandwiches, are a focus. But things veer off in an odd direction with the rest of the menu. I don’t know why anyone would go to a French restaurant and order fried chicken, but there it was as a feature on the menu. A burger, too. I stuck with the namesake.

I ordered the Boeuf Tartine, which featured frizzled bits of beef on a piece of house-made toasted bread with blue cheese, horseradish cream and peppery arugula leaves.

My companion ordered the Shrimp Tartine, which was reminiscent of a shrimp po’boy, but not as fully dressed. The shrimp were lightly breaded and fried, served on the bread platform with tomatoes and greens. Both were good, and I appreciated the option of ordering a half tartine.

The decor is homey, with a coffee shop/boulangerie vibe. Besides a small dining room, Tartine offers a few outdoor tables, very nice on a clement evening. Our server was personable and prompt.

I like the way that College Park is getting more of the kinds of restaurants that help make it a more vibrant neighborhood. A good variety, too, and Tartine adds to the mix with its French accent (and a bit of Southern drawl).