Spotlight: Sushi Cafe, All You Can Eat 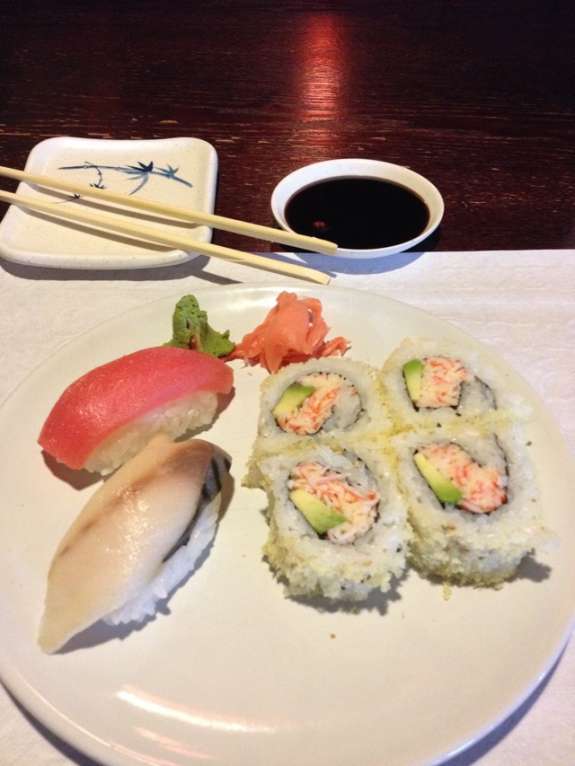 Here’s a twist on the all-you-can-eat promotion, and I can’t decide if it’s a brilliant way of getting people to eat less or a dastardly ploy to get them to eat too much.

But first off, let me say that Sushi Cafe, the mundanely named restaurant at the corner of University Boulevard and Goldenrod Road in Winter Park, does very good sushi. In fact, the nigirizushi that I sampled was among some of the most masterfully prepared that I’ve had in a long time. The pads were perfectly shaped, not too big, and the fish slices were properly placed on them so that one could turn the piece completely over so as to dip the fish in the soy — rather than the rice, which never turns out well — without the fish flopping off. Both the tuna and the mackerel were the right temperature, not so cold as to stun the flavor.

And the roll that I had, the egotistically named Yummy Yummy, which had avocado and krab inside a rice cocoon with crispy fried flakes on the outside, was also quite tasty.

It was all so good that I could have eaten more, but I was too scared.

Sushi Cafe features and all-you-can-eat option. You can have an appetizer and as much nigiri, sashimi or rolls that you want. But there’s a catch.

If you order too much, you’ll be charged 75 cents for each uneaten piece. Fine, you say, I’ll just take the leftovers with me. In that case, each leftover piece you want boxed up will incur a $1.50 charge.

I get it. The restaurant is offering what is, according to my quick math, a pretty good deal with its ayce option. Some people, however, might (will) simply over order and leave a great deal of food go to waste. And I don’t find the extra charge to take the food home out of order, either.

Unfortunately, I think more people will tend to stuff as much of the uneaten sushi into their cheeks to avoid the surcharge.

Just keep Gen. Dwight Eisenhower’s comments to his troops in mind: Take all you want, but eat all you take.