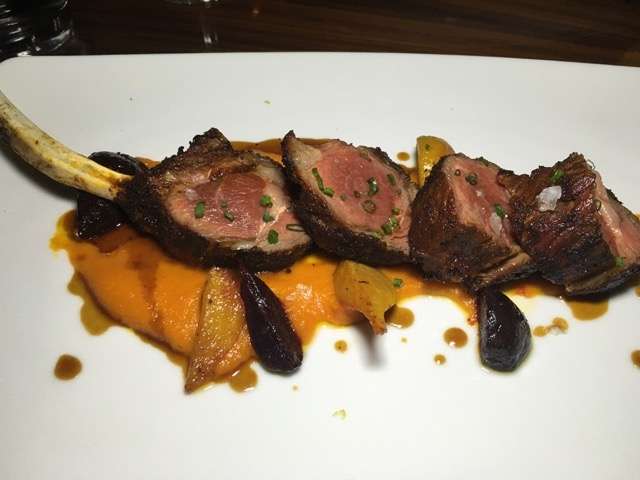 Your first clue to what the sound level will be during your meal at STK is the DJ booth, which sits prominently, raised like a pulpit, at the entrance to the dining room. Let’s just get this out of the way, folks: This isn’t a place for quiet conversation.

But the food is quite good, and the menu, under the direction of chef James O’Donnell, thoughtfully goes beyond the meat that the vowel-less name would suggest.

But meats are done very nicely. The Loin Strip was beautifully grilled with a nice char on the outside. Inside, the meat was just short of the requested medium rare, but none of us complained.

I took advantage of the special offering of Prime Rib Cap, a.k.a butcher’s butter, which should give you an idea of its texture. This is what people have in mind when they say the meat was so tender it could melt in your mouth.

One of my companions chose the Florida Grouper, a perfect case in point that the kitchen is just as serious about sfd as stk. The fillet had a beautiful pan-seared glow, which was enhanced by truffle lobster brown butter.

On the front side of the meal, we had enjoyed the Burrata, which was actually only a minor player in an ensemble cast that included beautiful heirloom tomatoes and Serrano ham.

Seared Scallops were perfect, maybe better than perfect with the short rib marmalade that accompanied.

I think I liked the purple potatoes served with the Grilled Octopus better than the octopus, which was quite good itself.

Desserts are designed to impress, at least visually. The Mini Ice Cream Cone Sampler was cute. The Warm Baked Cookie was too much.

STK has two levels and multiple moods among them. Upstairs is a more casual dining area than the tufted booths of the main room downstairs. There is also a balcony overlooking the springs of Disney Springs. And no, it isn’t any quieter out there.