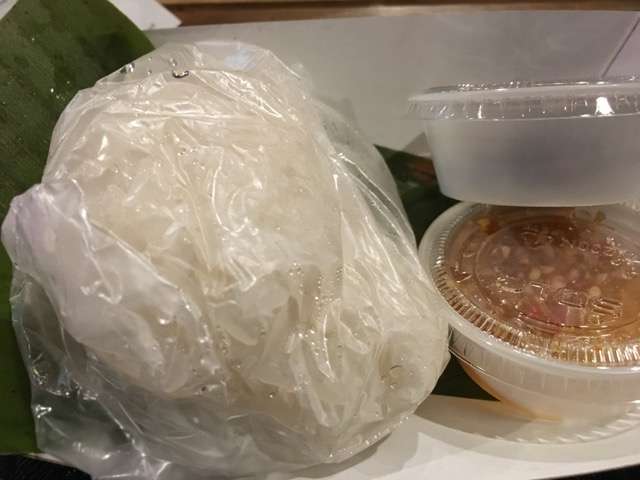 Even though I have limited real estate on my kitchen counter, my rice cooker has a permanent dedicated space. I’ve been known to make a full meal out of rice with just butter, salt and pepper.

So a new restaurant called Sticky Rice certainly got my attention.

You might classify Sticky Rice as another Asian street food restaurant. But unlike Hawkers and Mamak, which are pan-Asian, or even Rasa, with its focus on South Asian and Indo-Chinese cuisine, Sticky Rice, um, sticks with the foods of Laos.

The food item from which the restaurant takes its name is ubiquitous in that Southeast Asian country. According to one source, the Lao sometimes refer to themselves as children of sticky rice.

The dish couldn’t be simpler. If you’re familiar with the Chinese or Vietnamese versions, which usually include meats and seasonings with the rice cooked inside lotus leaves, you’ll find Laotian sticky rice quite different.

That’s because the only ingredient is rice, which is cooked by steaming. (My rice cooker would be essentially useless with this particular grain.) It’s a highly glutinous type of rice, but before you gluten freedom fighters freak out, you should know that despite that designation it is gluten free.

If you were to buy some sticky rice from a vendor on the streets of Vientiane it might be served in the small bamboo steamer it was cooked in. On the streets of Orlando, it is served in a small plastic bag, looking like an individually wrapped snowball. Sticky rice is meant to be eaten with the fingers. Just pull off a wad and dip it into one of the two sauces that come with a serving here.

Of course, one can’t live by rice alone, much as I’d be willing to give it a try.

I also sampled the Lao sausage made with fatty pork and seasoned with lemongrass (and also traditionally made with some sticky rice in the blend).

And the Sticky Street Wings, two drummies and two wing sections that weren’t especially sticky. They might have been better if they’d been more fully cooked. Mine were a bit chewy.

The decor is either mundane or colorful depending on which direction you’re facing. Seating is at picnic-style tables with individual stools and each table has a large roll of paper towels to tear off as you wish. Also, there’s a jar of moist towelettes for cleaning sticky fingers.