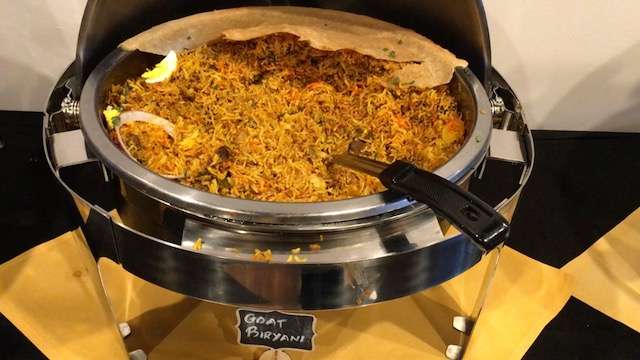 You might say that Southern Spice has brought back good memories. As in Memories of India, a once-fine restaurant from the same neighborhood.

Southern Spice features the foods of South India (mostly), and presents a few items that might be unfamiliar to you if your only experience with Indian cuisine is from Central Florida restaurants.

Though, like most local Indian restaurants, Southern Spice also features a buffet at lunchtime. But I haven’t experienced one quite so nicely presented and with such good food.

Some of the best of what I sampled on my recent visit were the vegetarian offerings, beginning with the appetizer of Gobi 65. Made with cauliflorets, the bite-sized nuggets had a fiery red color from the peppers in the batter, though the taste was not quite as flamey. (The dish is said to have been named for the year it was devised, 1965, at the Paradise Hotel in Hyderabad. It also sold for 65 rupees. Whatever)

Next to the Gobi were Plantain Poriyal and some more cauliflower in the Aloo Korma. Poriyal means fried, but in this case sauteed, with turmeric and chili powder. The Korma was delightfully creamy and mild.

All was not meatless. There was a Goat Biriyani, a Chicken Tikka Masala, and Andhra Chicken Curry. The latter had hunks of chicken in a spicy red gravy with a nice touch of heat.

Another unusual item was the Curd Rice. Although it sounds like it might be something akin to cottage cheese, the word curd refers to unsweetened yogurt. And it tasted exactly like rice with unsweetened yogurt blended in, a bit tart.

Beetroot Halwa was an interesting and tasty dessert. Although halwa usually refers to something firmer, this one was more liquid, but had the unmistakeable sweetness of beets. I liked it.

All the staff were courteous and helpful.

One of them told me that the items on the lunch buffet change daily, so some of the things I mention here you may not find when you visit. He also said that if you visit every day, you’ll eventually have everything offered on the menu.