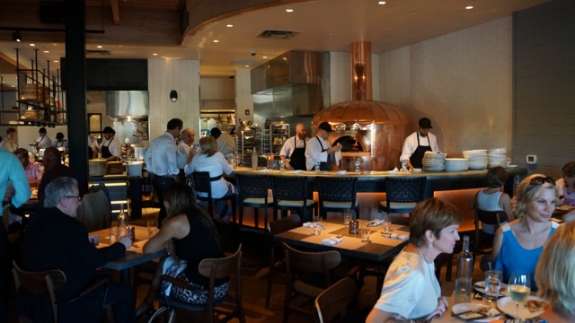 Slate is a new restaurant that has opened on Sand Lake Road’s Restaurant Row, and I’m not sure why.

It’s a lovely place, and the food is good, but I found myself looking for a thematic clue, something on the menu, for instance, that tells the guest “this is our specialty” or “this is what is going to make you want to come back again and again.” Unfortunately, I never found it.

Even the restaurant’s name is a misleading misnomer, for if there is a scrap of slate anywhere in the decor, I did not see it. Copper, yes. And exposed brick, white tile, steel, elements of fire, both functional and decorative, too. But no slate.

It is, however, a beautiful restaurant, which is what one would expect from the same people who brought us Luma on Park and Prato. But it’s also because of that pedigree that one should expect more logic here.

The menu features sections titled Start, In Hand, Green, Dough, and Main. I don’t know what compels people to try to out-clever the next person with menus but the results are rarely brilliant. Dough? Really?

My companions and I were served a number of Start items; all fine but nothing outstanding.

The short rib entree could have benefitted from a little more braise time.

The half roasted chicken was nicely done, served with potatoes and fresh green beans and with smoked butter melting over the golden skin.

Hearth roasted red snapper, too, was perfectly ok. The fillets were served atop summer squash “noodles” and accompanied by spoonbread, the creamier version of cornbread known mainly in the South.

Servers were generally affable but clearly in need of training.

Am I holding Slate up to a higher level of scrutiny? You bet I am. All of the people involved in this operation are veterans in finer dining, and some of them have been directly involved in thrilling Central Florida palates at other venues. There’s no reason this one can’t come up to that level. Perhaps all they need to do is start with a clean slate.