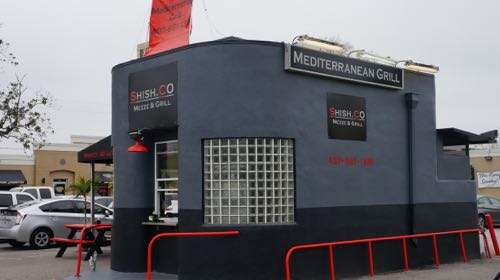 Here’s a cute little restaurant that makes me think of a food truck without wheels. It’s a pop-up restaurant in the sense that it looks like it just popped up in the middle of a parking lot in Maitland.

It’s called Shish.Co Mezze & Grill, a Mediterranean eatery with a compact but comprehensive menu of such favorites as gyros, shish kebobs, falafels, and even lamb chops.

Some of the items are available as a pita, a sandwich (on a French roll to distinguish it from the pita), or as a bowl. It turns out the bowl can be a sandwich of sorts, too, as I found out when I ordered the kofte that way.

Kofte, of course, are the Mediterranean meatballs, which are slightly misnamed because they’re flattened. I ordered the bowl option thinking that it would be, you know, served in a bowl. Instead, it was served on a large piece of soft lavash whose corners were pulled up to be bowl-like. Into this bowl had been scooped rice, pickled onions and peppers, and the aforementioned meatflats, and pretty purple sumac had been sprinkled over it all.

The koftes were delicious and obviously freshly made. They had big flecks of parsley and were well-spiced but not spicy.

I sat on one of the picnic tables painted a startling red that sit covered next to the building. While I ate, one of the three workers stuck his head out the ordering window to ask if everything was OK, and another, a young woman wearing a poofed chef’s hat that matched the color of the picnic tables, came out to ask how I liked the kofte. There was genuine pride in the food, which is always nice.

This structure is not new. I think it has been a hot dog stand and and burger joint. Maybe ice cream was involved at one time. Whatever, these folks have spiffed it up and are serving some deliciously authentic food. Stop by and give it a try.