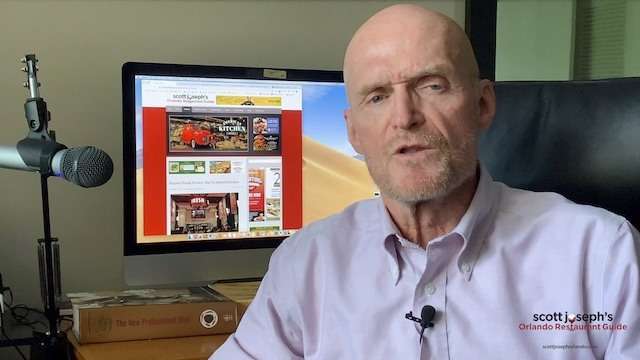 This article is abridged for broadcast. Find the full version of the review at Scott Joseph’s Orlando Restaurant Guide on this page.

This year there are more than 120 participating restaurants, each offering a special three-course, prix fixe menu for $35. As in years past, one dollar from each dinner sold will be donated to a local charity, though at the time of publication the charity still had not been announced.

With so many restaurants, you’re going to have to do some research in order to choose wisely. Come in a little closer and I’ll show you how I go about making my selections for Magical Dining.

First, I go to the official Magical Dining website. The site has always been cumbersome and not very user friendly. This year, it’s even less user friendly — or is that user unfriendlier? – but I’ll get to that in a minute.

The first thing I want to do is look over the entire list of participating restaurants. I’m looking for old favorites I might want to revisit as well as new restaurants I want to check out. Hey, restaurant critics like to save money, too.

If you just go to the list of restaurants, you’ll see that they’re presented 12 to a page, grouped by area. The convention area is first, because Visit Orlando. You can click through all 10 pages of listings, or you can use the filters at the top of the page to look at a particular area or find a certain cuisine.

But I recommend you do this instead. Go to the Magical Dining home page and click where it says, “Download Visit Orlando’s Magical Dining Restaurant Checklist and Map.” That will take you to a page with all of the restaurants displayed in a handy chart. You can also print this out and put a checkmark next to the restaurants you’re interested in exploring.

Be careful of the nebulous Surrounding Areas category. It does have some restaurants, such as 1921 Mount Dora, that are actually in what would be called a surrounding area. But it also includes restaurants like Earls Kitchen and Bar, which is right about here on the Magical Dining map. And Texas de Brazil, which actually has an International Drive address.

So, once you’ve selected the restaurants you’re interested in exploring, it’s time to explore.

Now you want to go back to the detailed list of restaurants and call up the listing for one of your choices. You can do this by filtering by area or you can type the name in the search box.

Big Fin Seafood Kitchen is a favorite of mine so let’s take a look at it. On its page you’ll find the options for each course along with a description of the dish. You’ll find a bit of description about the restaurant, a map of its location, address and phone number, and a hot link to an online reservation site.

What you won’t find this year from years past is a direct link to the restaurants’ websites. So you’re going to have to open another browser tab and search for it.

This is necessary because you want see whether the $35 Magical Dining menu is a good value or not. So let’s open Big Fin’s online menu and take a look.

On the list of appetizers, the half-dozen raw oysters are listed at $15, smoked fish dip $10 and the Crispy Popcorn Shrimp. Under Main Course, the Shrimp Orleans is regularly $22 but the Crab Crusted Corvina is $30. And the Apple Pie Bread Pudding for dessert goes for $9.

So if you go with the oysters, the corvina and the bread pudding, you’re getting a $54 dinner for $35. That’s a pretty good deal.

Here’s a restaurant called Euphoria that’s new, so naturally I’m interested in what it has to offer. But it doesn’t list any prices on its online menu, so I just move on.

And the Grill at Marriott’s Grande Vista doesn’t even have a menu on its site.

I’ve always thought that one of the advantages for restaurants to participate in Magical Dining was the opportunity to showcase their regular menus to a new audience. I’m wary of Magical Dining menus that aren’t representative of a restaurant’s usual fare.

For example, Artisan’s Table in downtown Orlando has two of the three appetizers from the MagDine menu on its online menu but none of the main courses.

And Outpost Neighborhood Kitchen has only its Cauliflower entree on its menu, listed at $16, which makes me wonder if I’d be getting a good value.

I don’t have to wonder with Menagerie. If you didn’t do your research beforehand and ordered the Coconut Curry Mussels, the Brick Chicken and the Donut Bread Pudding, you’d break even, based on the restaurant’s online menu. No reason to waste a Magical Dining opportunity there.

A couple of boilerplate notes. I’m noticing this year that a lot of restaurants are promoting their Magical Dining menus, which is great. Still, you may have to specifically request the Magical Dining Menu when you are seated. Don’t just go to your notes and order the MagDinMo items from the regular menu and expect to be charged only $35; it doesn’t work that way.

Also, know that your check is going to be more than $35. Tax and beverages aren’t included, so expect to pay more than $50 per person, even with a modest glass of wine.

And please, don’t shortchange your servers. Take the total amount of the courses from the regular menu and tip on that figure.

Have a happy Magical Dining…month plus.