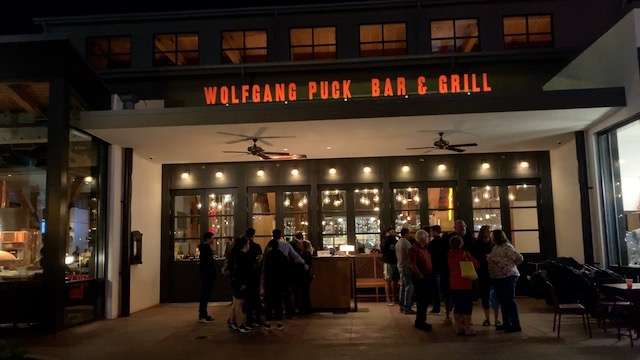 Wolfgang Puck is back in town after a very long absence.

And by that I mean a lot longer than just the closing of the former Wolfgang Puck Cafe. The California celebrity chef long ago sold that brand, and its quality waned. But Puck himself is back now with Wolfgang Puck Bar & Grill. It does not stand on the old site — scorched earth, perhaps — and it’s removed in another substantial way: The food and ambiance are as good and enjoyable as when his old restaurant first opened in ’96.

I knew that I had to try the Schnitzel, which was a favorite of mine from the old place. Here featuring chicken, the schnitzel had a wonderfully crisped golden jacket, subtly seasoned. A fine tribute to Puck’s native Austria.

I also knew that I had to try one of the pizzas, because it was his designer, California-style pizzas that popularized Puck. Baked in a large copper-clad oven in front of the bar area, the pizzas have the characteristic thin, noncrispy platform with a puffed crust edge and simple but ample toppings. I had the pepperoni version, which was not as exciting as some of the other options, but I enjoyed it.

For appetizers, my guest and I shared the Roasted Meatballs, densely packs orbs, well seasoned, coated lightly with tomato sauce and topped by a dollop of ricotta cheese and a basil sprig garnish.

We also had the Tempura Shrimp and Calamari, thin coated and crisply fried, served with a roasted lemon and lemon aioli. The seafood was topped with flash-fried basil that had a nice salty note.

Servers showed training if not polish. Someone might suggest to the young fellow at the outdoor host stand that “Hi’ya, fellas” is not an appropriate way to greet guests.

Unlike in the mid nineties, Puck is not alone in his celebrity chefdom at Disney Springs. But there’s always room for one more chef-owned restaurant, especially when it’s done well.