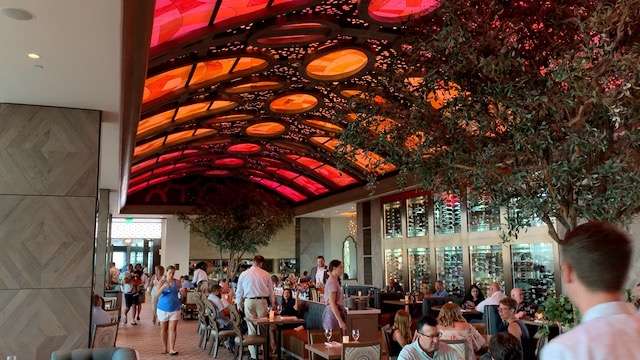 So it turns out that Walt Disney and Salvador Dalí were good friends. Explains a lot, doesn’t it?

In 1945 the two began a collaboration on an animated short film called Destino.

It’s phantasmagorical and classically surreal with plenty of Dalí trademarks, including several things that melt. At one point, a hole opens in the palm of the main character and ants crawl out, then the ants morph into men riding bicycles with baguettes on their heads, because why not?

It’s a little over six minutes long but that’s enough to inspire the Gran Destino Tower, a 16 story, 545 room addition to the Coronado Springs Resort, and to provide the backstory for the new top-floor restaurant, Toledo.

Toledo’s menu is Spanish inspired. My meal started with a trio of pintxos — Mussels Escabeche, Valdeón Cheese and Tortilla Española. The tortilla, the traditional potato omelet, was wrapped in salty Serrano ham and topped with an olive relish. It would have been my favorite if not for the tangy wonderfulness of the Valdeón blue cheese, served on a slice of bread smeared with fig jam. The three were served on a plate fashioned out of a melted bottle because Salvador would have wanted it that way.

For my entree I chose the Tilefish, which was balanced atop small whole potatoes and topped with a stack of shredded fennel. It was accompanied by singed cauliflowerettes and a Valencia orange sauce. The fish had a beautifully crisped exterior and the white flesh was moist, flaky and delicious.

The staff is up to the usual Disney standards and thankfully no one wears headgear fashioned out of bread.

I sort of wonder what the new hotel tower and its restaurants and bars would have been called if Disney and Dalí hadn’t collaborated on the bizarre film. But I’m glad they did, and I’m glad the bizarre obtuseness of the movie didn’t dissuade the Disney “culinears” from using it as inspiration for a wonderful new restaurant.