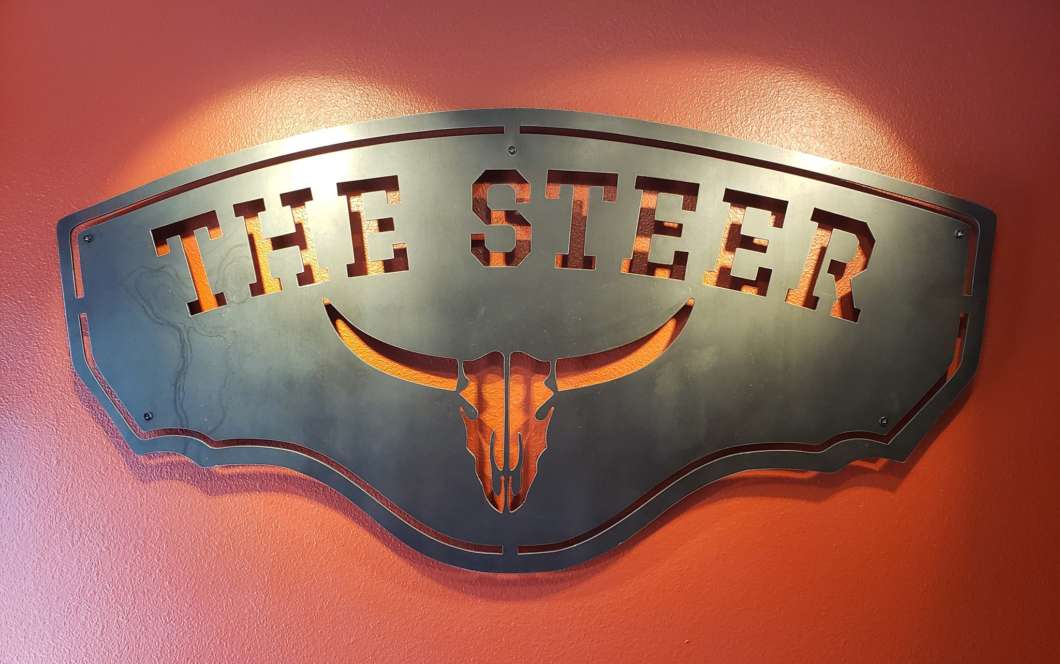 The Steer is located in Orlando and celebrates the pioneers of Orange County. Photo: The Steer website

Take a look at the menu offered at the Steer, a new steakhouse on South Orange Avenue, and you’ll realize this is not a restaurant gunning after the likes of Christner’s, Ruth’s Chris or even Linda’s La Cantina. When you can get a 12 ounce New York strip for $15, you’re probably not in the realm of fine dining.

The restaurant’s subtitle – Pioneer Steakhouse – might lend a clue, as well, to its rusticity. It occupies a former Pizza Hut hut that most recently, and for decades, was home to Bauern-Stube, a German restaurant noted for its eclectic and cluttered decor. Perhaps the best that can be said for the Steer is that its owner successfully un-Stubed the place.

But go back to the price point and you’ll find it easier to find other kind words.

I thought I would start with an appetizer of Bitz-O-Chix, which I assumed were meant to be a boneless take on Buffalo chicken wings. We’ll never know because the kitchen was out. And nothing else on the limited list of starters appealed to us. (I long ago learned to leave alligator to tourists who order it just so they can tell their friends back home that they ate it before it could eat them.)

And starters weren’t really necessary because most of the entrees include a house salad, bread and a side item, which makes the prices even more attractive.

One of my guests chose that New York Strip and another the Filet Mignon. Neither was cooked to the requested temperature but at least came close. And they looked pretty enough with the requisite grill marks.

Prime Rib, which was served, oddly, beneath a pile of sautéed mushrooms and onions. It lacked the tenderness one expects from prime rib.

Servers were friendly if not entirely well-versed in the menu.

Again, we’re not talking fine dining. But at the price point, you should be satisfied with what you get.