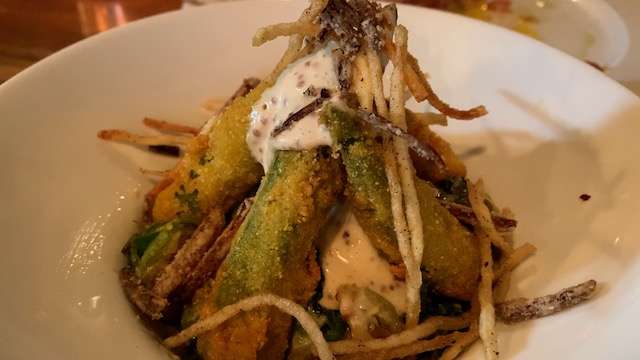 Today we’re visiting the Old Jailhouse in Sanford. But I promise: no puns about incarceration, and the only references to consecutive sentences will be the ones spoken here.

The Old Jailhouse is legitimately housed in a small building that was the Seminole County Jail from 1914 until 1959.

More recently it was home to a dry cleaner and, here’s irony for you, the Seminole County Health Department.

Old Jailhouse’s opening represents the return of chef Bram Fowler, who gained a following at his Journeys restaurant, to the local culinary scene.

For my appetizer I chose the Crispy Brussels Sprouts and Okra, a teepee of buttery sprouts tented with whole okra, lightly dusted with cornmeal with a bit of mustard aioli.

My companion had the Pork Belly, served on tiny rafts of buttermilk cornmeal, topped with house-made pickles with a smear of tomato chutney.

The overexposed Shrimp & Grits was made anew in the Low Country Shrimp and Sausage entree. Here, the shrimp, tender and firm, were alternated with coins of country sausage, circling a mound of cheese grits covered with sausage gravy.

The Creole Lamb featured a braised shank on a very large pile of diced sweet potatoes with a red bell pepper sauce. Good flavors. And what great restraint must have been exerted to refrain from naming this dish the Lambshank Redemption.

The building doesn’t seem to have been redesigned as much as it has been deconstructed, exposing brick, mortar and wall scrawls underneath. Some semiprivate dining areas are enclosed with sliding bars, but crystal chandeliers take away any dankness of detention.

Sanford’s culinary scene is burgeoning. But most of what we’ve seen has been casual, more along the lines of bars and tavernas. With the Old Jailhouse and Fowler’s food, there is now a more upscale option.