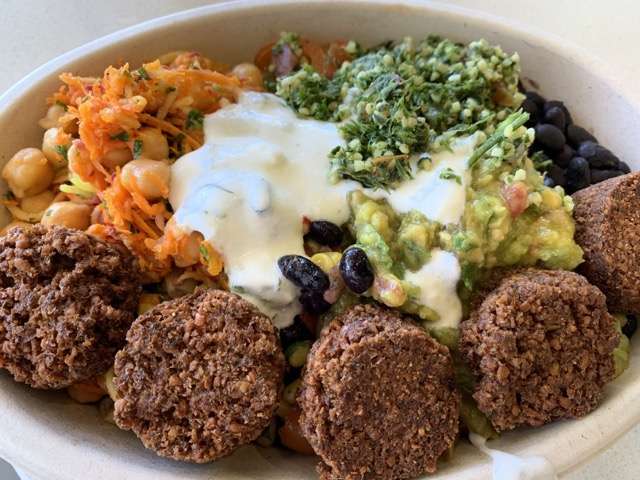 The young woman behind the counter at the Mexican Camel, responding to my question regarding how the concept works, said, “We’re sort of like Chipotle.”

Just as a matter of brand recognition, it may not be advisable to suggest you’re copying another restaurant. And if you do, maybe choose one that hasn’t been plagued in recent years with foodborne illnesses.

But what she was trying to convey is that the Mexican Camel is yet another assemblage concept wherein diners choose the ingredients to be piled into a conveyance and thus take all responsibility if the melange sucks.

But Mex-Cam has its own unique spin, and that’s that it combines Mexican and Mediterranean flavors in one dining excursion, making it possible to screw up your choices with two separate cuisines.

So here’s how it works. You first choose your base, which here can be a pita, burrito or taco, or a bowl.

Then you choose a protein, such as chicken kabobs, chicken barbacoa, steak, lamb, seafood or falafel.

It’s with the sauce and toppings options where things start getting regionally specific. There are separate collections for sauces and accouterments that might be considered Mexican – jalapenos, salsa, guacamole, chimichurri – and another grouping for Mediterranean – feta cheese, tabbouleh, harrisa and tzatziki.

On my visit I chose a bowl of yellow lentil rice as my base, falafel as my protein and myriad add ons, including guacamole, corn and black bean salsa, tzatziki, taboule and chickpeas.

My choices were predictably off point.

The falafel fritters were hard, impossible to spear with the rather flimsy plastic forks provided. A tad dry, too. And my topping choices didn’t make sense. If only there had been someone who could recommend combinations, even some that fused the two cuisines. You know, someone like a chef.

It would be nice if, in addition to the ruin-it-yourself option, there were some preset menu choices. Also, sturdier forks to eat them with.