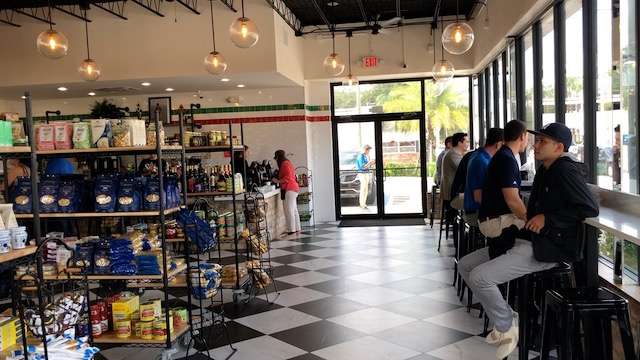 This review has been abridged for broadcast. Click here to read the full review at Scott Joseph’s Orlando Restaurant Guide.

I sort of get the impression that Stasio’s Italian Deli & Market is a work in progress and that the people doing the work aren’t exactly sure themselves what the final product will be.

But for all the tentativeness in the air, the food that I’ve sampled so far is solidly good.

I dropped in for an order to go because one of the things that is still uncertain is whether Stasio’s wants people to dine in. There’s a marble ledge at the windows for people to eat at, and a couple of outdoor tables. But it definitely isn’t a linger-over-dinner spot.

The menu is mainly sandwiches. I chose the sandwich named after the place and another called The Package.

The Stasio was a cold sandwich with prosciutto, capicola, soppresata, roasted red peppers and mozzarella cheese in a very large but fresh roll. Actually, the sandwiches aren’t so much served on rolls than on loaves. And the size has a lot to do with the cost: $13 for my Stasio. The meats were plentiful and it was a good sandwich, though if I’d been dining in I might have asked for some extra oil and vinegar to oomph it up a bit.

The sandwich called the Package featured meatballs, spicy Italian sausage smothered in marinara and covered with a cloak of melted mozzarella. You know, a package. Good spicings in the sauce, and I liked it better than the Stasio, though I found the meatballs a bit too moist.

Staff were helpful in pointing out the process, such as it exists now. Menus on the counter, place your order there, pay over there, wait for someone to call your name.

While you wait, you can stroll through the few shelves that warrant the market designation.

Would I think to come here to shop? Probably not.

But like I said, Stasio’s seems to be figuring things out as it goes. I like the way it’s going so far.