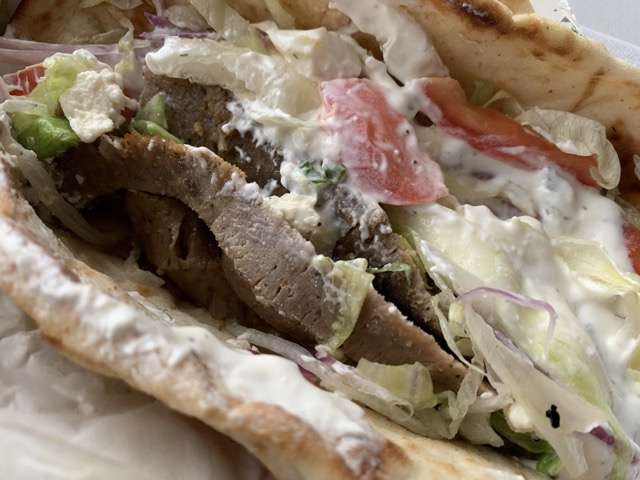 Restaurateur Sunny Corda, whose current brands include Rasa, Saffron and Mynt, is stepping out of his Indian milieu and dabbling in a bit of Greek with Simply Gyros.

As the name suggests, the menu is straightforward and focuses on gyros. However, if your concept of a gyro is lamb and beef sliced from a vertical tower of meat that continually spins on a rotisserie, you should know that here a falafel sandwich is also considered a gyro. So is chicken, though in both cases I would classify them as shawarmas or doners. But far be if from me to be difficult about a place called Simply Gyros.

Then again, a fellow who answered the phone at the new restaurant said, “Thank you for calling Simply Gyros,” giving “gyros” a “j” sound and the “y” a long “i” sound. I would no more use that pronunciation than I would call my favorite Italian soup pasta “fazool”. Gyro should be pronounced yee-roh. I’ll entertain no arguments. Yes, the word comes from the Greek word for turning, which you might also translate as gyrating, but I’ll hear no more of it.

But my mispronounced sandwich was good. The fellow behind the counter used an electric slicer to shave the meat off the spit. It was placed on a puffy pita. And then things left the land of simple.

The young man held my sandwich behind the counter as he stood in front of about a dozen condiment bins and asking me what I wanted on my gyro. I looked down and the first thing I saw was black olives. Who puts black olives on a gyro? Perhaps someone who pronounces it with a “j” and a long “i” sound. I told him to make it with the traditional toppings.

And so my sandwich had shredded lettuce, tomatoes, thinly sliced red onions and a slathering of creamy tzatziki sauce. The meat was well spiced and the bread, an important part of a gyro, was doughy and fresh tasting.

The menu also has spanakopita and hummus for noshing, and there is an entry called a King Gyro that includes beef, lamb and chicken in one sandwich.