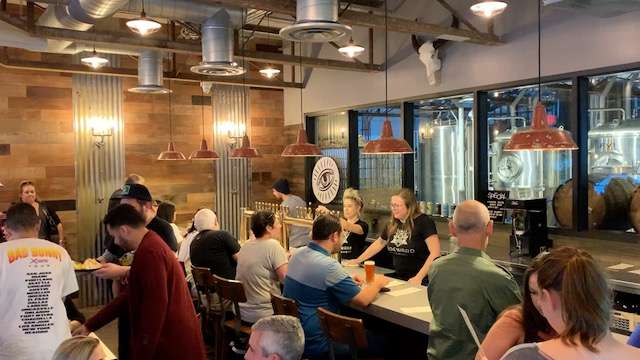 Have you noticed that there are a lot of microbreweries popping up lately? I count six in the downtown area alone.

Now comes Sideward Brewing to the Milk District. Sideward is not the biggest local brewers. But it has two things the others don’t.

One is a license to produce cider on the property as well as beer. (Cider production requires a winemaking license, for some reason.)

The other thing Sideward has to its advantage is some pretty good food to go along with the beers.

The owners have done something astute with the food menu: they kept it small. It’s better to focus on a few items and do them very well. And that’s what Sideward’s kitchen does.

At least with the sandwiches I sampled on one of my two visits there.

The Roast Beef sandwich was served on buttered sourdough bread with plenty of thinly sliced medium-rare beef, a swab of pimento cheese and a bit of horseradish infused mayonnaise.

I would have dinged the kitchen on the Cubano Sandwich if it, too, hadn’t been so good. I was initially appalled that it was served on a pretzel roll. I happen to like pretzel rolls but they really have no business being part of a Cuban sandwich. Also, instead traditional yellow mustard the sandwich had whole grain mustard. The rest of the sandwich was traditional, with ham, pork and cheese plus the necessary pickles.

The sandwiches came with a choice of sides, including one called Gram’s potato salad.

Potato salads are culinary landmines, especially ones named after a family member. The problem is that just about everyone’s mother made a potato salad, and you’d be hard pressed to find two alike.

But Gram’s potato salad had me wondering: Could I possibly be related to the owner’s grandmother? It tasted like my mom’s own. Big hunks of potatoes with eggs tossed in mayonnaise. It darn near brought tears to my eyes.

There’s no denying there’s an explosion of microbreweries, but one that can make good beer and good food to go with it will be ahead of the curve.