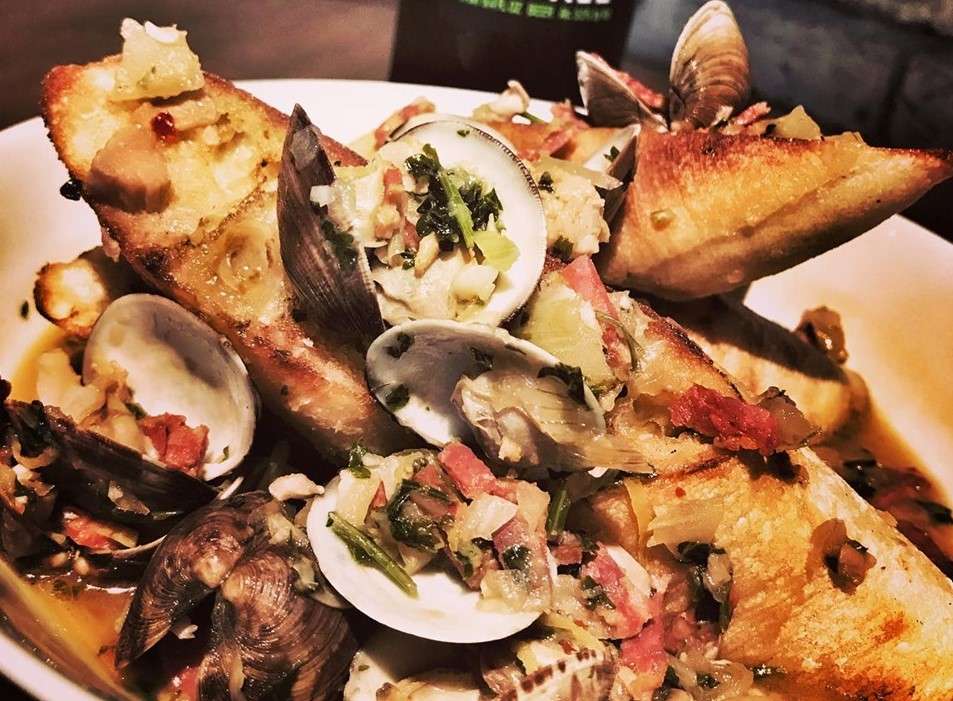 Sette, one of the year’s most anticipated restaurants, has opened in Ivanhoe Village. The reason for the excitement is that it is the first full-service restaurant from Trina Gregory-Propst and Va Propst, owners of the popular Se7en Bites bakery. It took over the space that was previously Stir Restaurant & Bar, NOVA and Elliott’s Public House. All of those were startlingly short lived, so most people still thing of it as the location of Brian’s, a popular greasy spoon.

Little has changed with the decor from the previous tenant, which is fine — it’s a pleasant and comfortable atmosphere. The bar area seems a bit more accommodating, and the open kitchen allows guests to see the food being prepared.

And what good food it is.

Sette is Italian for seven, which apparently is the couple’s favorite number. So the menu is a succinct collection of Italian interpretations.

Gregory-Propst offered a tasting of the Sausage with Grapes appetizer, a Calabrian dish of little sausage balls seasoned with fennel and big juicy blistered grapes. An unusual combination but a refreshing one.

I also sampled the Mussels, which were tenderly prepared and served in a delicious liquor of white wine and butter.

Sette produces its own pasta daily, which was evident in the freshness of the Mushroom Pappardelle. The wide noodles, a perfect al dente, were tossed with wild mushrooms, a bit of pistachio and a touch of Calabrian chilies, which gave it just a hint of spiciness.

Desserts are straight from the Se7en Bites bakeshop, so they’re very good and very large. I was served the Lemon Olive Oil Cake, which was big but not heavy. The recipe was tweaked to include lemon rosemary curd, and icing it with lemon mascarpone butter cream.

Serving the bakery’s pastries is a good bit of branding synergy. Think of it as multiples of seven.