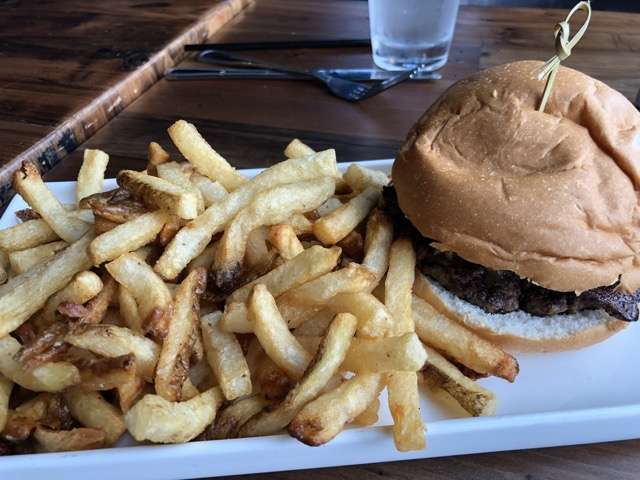 This review has been abridged for broadcast. Find the full review at this link to Scott Joseph’s Orlando Restaurant Guide.

Nona Tap Room is gone and Nona Social Bar + Kitchen has taken its place. Except for the variation of the name, I can’t see a whole lot of difference between the two.

It’s still a neighborhoody place that is more bar than kitchen. Still a bit on the small, cozy side. It still features a menu that is burgercentric. And the kitchen still can’t cook a burger to a medium-rare temperature. Or perhaps just refuses to.

Too bad because the burger I had when I visited recently, the Bacon Bleu, was a good burger than could have been better if it had been cooked properly. The patty was a decent size and had a nice char. It was topped with a smear of blue cheese that was half melted, plus a couple of thick-sliced bacon rashers. The bun was plain but fresh.

The accompanying fries were better than average. I give them a B.

As I said, the bulk of the menu is burgers, though there are also tacos, sandwiches and salads. Nona Social’s website features a photo of what appears to be a salmon entree, but I’ll be darned if I could find one on the menu.

Speaking of photos, if you were to visit the website and Facebook page you’d probably come to the conclusion that Nona Social wants to be known as a “breastaurant,” in the image of a Hooters or something. I thought we were entering a more enlightened age but apparently not.