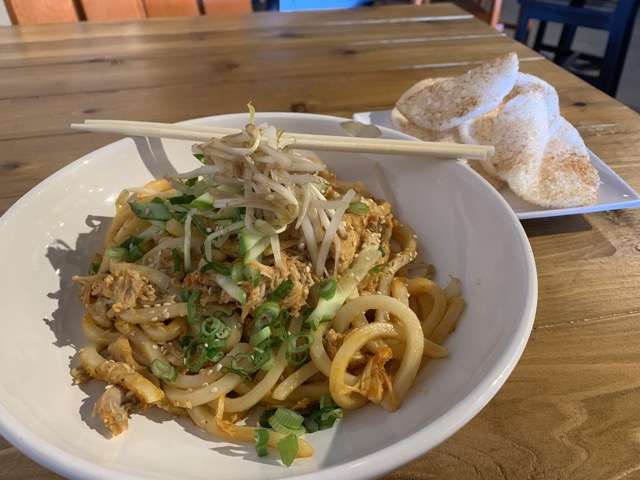 Central Florida certainly has a lot of dingy strip malls, but I can’t imagine there are too many that are dingier than the one on the southeastern corner of Dean Road and University Boulevard in East Orlando. It always has the look and feel of a place that is run down and neglected. Ironic then that it seems to attract independent restaurateurs.

Luckily, the interior of one of the newest tenants, Naroodle Noodle shop, a Japanese restaurant specializing in ramen and other noodle-centric dishes, doesn’t reflect the exterior.

Naroodle is a small, quick-serve operation. The interior decorator was not given a big budget to work with, apparently. Minimal wall decor, including the requisite Japanese robe, are some of the touches. Five white panels (could those be pillowcases?), each with a Japanese character in red, hang over the counter that separates the dining area from the kitchen. Under a television panel behind the counter are four cartoon characters and the words “suffer, fear, pray, fall,” which I hope have something to do with the characters and isn’t the restaurant’s business plan.

The menu features ramen but also non-brothed entrees, listed under the heading “More Noods.” I was in a nood mood, so I ordered the Yakisoba with chicken. It had the big, fat buckwheat noodles tossed with scallions and bean sprouts and dotted with sesame seeds. It was evenly, and mildly, spiced and I enjoyed it.

As a lunch special, an order of Cho-chips was offered with each entree. These are crispy rice puffs that would taste like air if they weren’t dusted with seasoning, a barbecue powder in my case. You can get “fire style,” too, but I couldn’t stop thinking about the “suffer” slogan.

Naroodle’s staff is young and seem to be learning as they go.

It’s my guess that the name is a take on Naruto, the illustrated Japanese series about a teenage ninja.