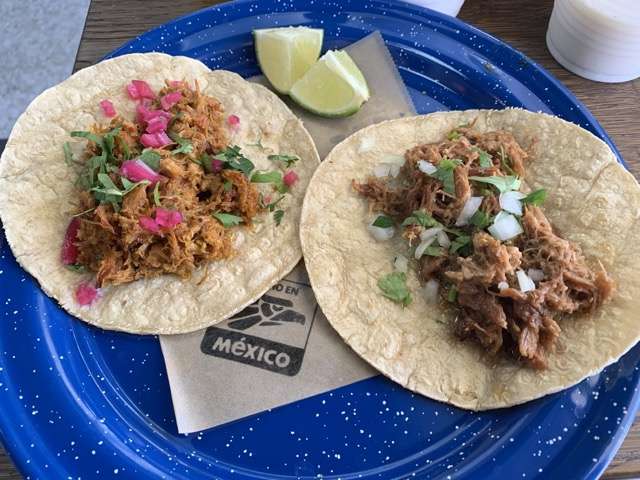 Some who have jumped on the taco-slinger bandwagon would have you believe that a taco is a taco is a taco. But Manning, who has lived and worked in Mexico as a chef with Ritz-Carlton, will tell you that each region has its own style, with distinguishing salsas, moles and meats.

I came back from a recent visit to Mexico where I had one outstanding taco and the next day visited Manning’s new Milk District restaurant, MX Taco, where I had seven.

A favorite was one of the first I sampled, the Cochinita Pibil from the Yucatan, pulled pork seasoned with bitter orange and dotted with pretty pink pickled onions.

It’s interesting to have sampled the bitter orange pulled pork next to the Carnitas, the more prevalent confit style pulled pork from the Michoacán state, this one every bit as moist but served more simply with chopped raw onions and a sprinkle of cilantro.

Another offering that I liked very much was the Bistec con Zikil Pak. It featured steak as the main ingredient but it was elevated above the ordinary by a sauce made of pumpkin seeds. I could have made a meal of the sauce with some tortilla chips.

Besides guacamole and chips, an antojito worthy of your attention is Manning’s Esquites, the Mexican street corn, here served in a creamier version.

And I have to say I was surprised by the avocado ice cream, with shaved chocolate and pumpkin seeds. It was as delicious as it was refreshing.

Manning also produces and bottles three hot sauces, but really the tacos are so perfectly seasoned and sauced that I saw no need to enhance.

MX Taco took over a small space in a compact strip mall that was previously occupied by Arepas & More. There is a modicum of seating, though Manning has plans to add a patio on the side of the building. It is a quick-serve operation, so order and pay at the counter then wait for the food to arrive.

The Milk District is emerging as one of the city’s destinations for good food, if not full service dining then for good, quick bites. MX Taco is a welcome addition not only to the district but to the overall food culture of Central Florida.