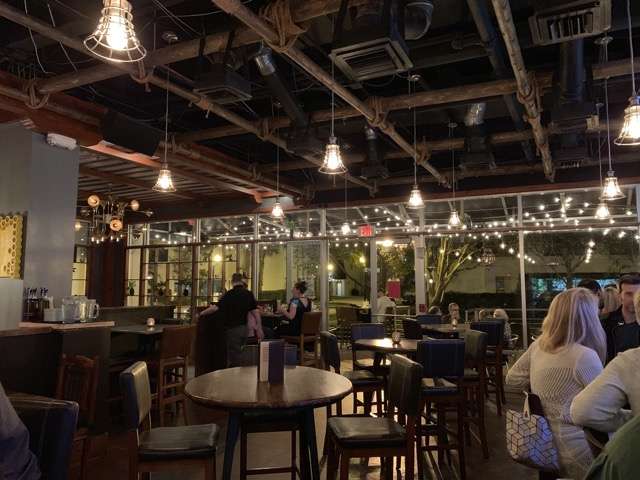 I’m not exactly sure what Menagerie Eatery & Bar wants to be, and I’m not sure the people running it know either.

The menu is a mishmash of cuisines, styles and food genres, which I suppose befits a place called Menagerie. The restaurant’s Facebook page says it is “chef driven,” but nowhere could I find the name of a chef. Or a driver, for that matter.

When Menagerie first opened, last fall, it was said to feature mainly small plates. But the menu seems to have morphed into one that offers more substantial fare. Indeed, when I visited recently, a Prime Rib dinner was the special offering of the evening.

It was served, oddly, in a sort of deep-sided baking dish that made it difficult to negotiate a knife and fork.

And the meat? It was a very nice slice, thick and a good medium rare cut. But it was not heated through — the veins of fat, which should have glistened were white and hard. There’s a reason you don’t see prime rib on many menus — it’s difficult to do it right.

I expected the menu to have a burger but I didn’t expect it to be named Bumble Bee.

But there it bee. I don’t know why it’s called that. Thank god it isn’t because it’s slathered with honey. Maybe the sriracha aioli is supposed to give it a sting? It didn’t. But the burger itself, an eight-ounce thick patty with melted white cheddar and a bit of brisket on a brioche bun, was quite good. And it was cooked to a perfect medium rare.

Menagerie Eatery & Bar has the bar part down pat. The bartenders were amiable and seemed to enjoy their craft. And the drinks were good, too.

The decor is eclectic and minimalistic. Let’s just say it isn’t designer driven.

I’m encouraged that Menagerie Eatery & Bar will eventually find its way because the Stubborn Mule, which has the same owners, suffered the same identity crisis when it first opened, and it has settled down nicely. Though on certain nights, it too can be a zoo.