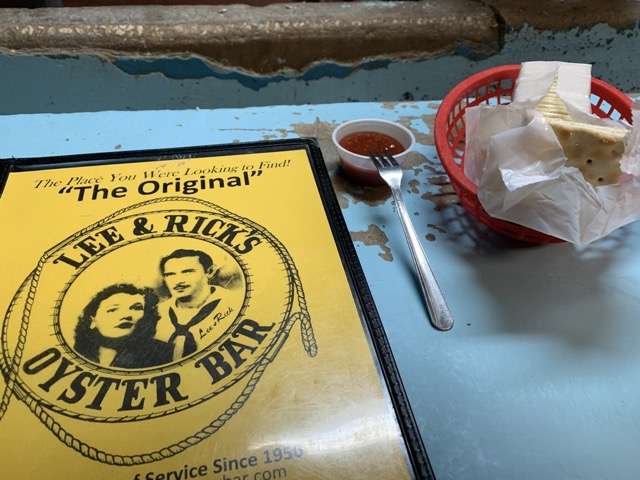 Whenever anyone asked me about Orlando dives — and you’d be surprised how often people ask — there were always two immediate answers: Wally’s and Lee & Rick’s Oyster Bar.

Wally’s closed last year. And while it is scheduled to reopen soon with a new owner, its diveyness will have to be determined.

But Lee & Rick’s, now in its sixty-ninth year, is still around and just as unrefined as always. From the cheesy boat facade to the concrete bar with big hunks chipped away from years of shuckers banging their knives on it to pry open oyster shells, this Orlando institution is a delight for the senses.

Husband and wife Lee and Rick Richter opened the restaurant in 1950 as a nine-stool business that only sold oysters. Rick had been in the navy and discovered oysters in Florida’s panhandle. As odd as it may seem today, oysters weren’t common inland. So he decided that’s what they would specialize in.

And they still do to this day as the restaurant continues under the ownership of the Richter’s oldest son, Gene. In fact, oysters on the half shell may be the only reason to go to Lee & Rick’s.

My companion and I stopped by on a recent rainy evening and lucked out with a couple of just-vacated stools at the oyster bar. There are more than nine stools now, but they’re all usually occupied — and the only acceptable place to sit here.

We ordered a couple of beers and a dozen oysters.

The beers were appropriately cold and the oysters were delightfully plump and chewy, but not at all tough. We were also presented with a whole sleeve of saltines (I have to admit I’ve never quite understood the saltines and oyster connection) and a big bottle of cocktail sauce to squeeze out at will.

We ordered some kitchen food, too, but it isn’t worth mentioning.

Don’t come here for the hot food, come for the cold oysters.