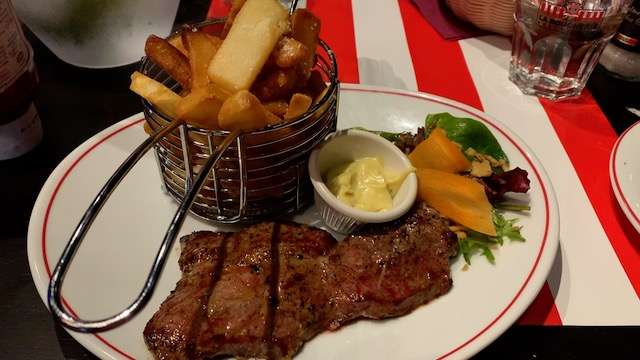 In the 15 or so times I’ve been to France, I’ve never once come across La Boucherie, which, on the website for the chain’s first U.S. location, now open in Orlando, claims to be “France’s most popular steakhouse.”

So I can’t attest to how the experience of the Orlando restaurant compares to one in Paris. Or Morocco, Russia or Thailand for that matter. I wonder if they use the same ridiculously flimsy napkins, and if so why. Or if their menus have garish photographs like you’d see in a 24-hour diner.

But I certainly hope La Boucherie in Chelyabinsk, Russia, has the same good food as the one in Orlando.

The menu is quite French, at least in content if not in graphic design. It is definitely not haute cuisine but more milieu. Its name is a clue that it is meat centric and steaks do have a heavy presence.

My companion ordered the veal blanquette, a white ragout with a creamy sauce, mushrooms, onions, carrots and big hunks of stewed veal that pulled apart easily. The sauce was hot but some of the meat was cool in the middle, but it eventually evened out.

I went the stereotypical French steakhouse route with Steak Frites and was not disappointed. Although the sirloin steak was thin it was nevertheless cooked to the requested medium rare and had a nice peppery seasoning. The fries were chunky but crispy, and I ate a few more than I intended to.

For starters we had Escargot, prepared a la Bourguignon, with several chewy nubs simmered in well garlicked butter with enough parsley to make you think they’d just slithered out of the garden.

Servers follow proper protocol. They are made to wear oddly wrapped aprons that sling over one shoulder, Flintstone fashioned, and tied in such a way as to make you think that no one had ever worn an apron before. Looks really uncomfortable.

But it’s probably just part of the franchise’s branding, just like the logo featuring the head of a smiling cow with its tongue in full lick.