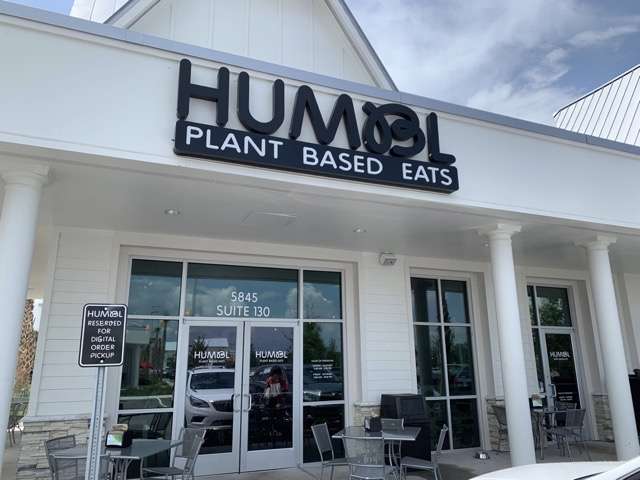 The chicken was good enough to fool us; the burger not so much.

I was dining with a colleague at Humbl – that’s without an e on the end – a new restaurant in Windermere. It’s a fast fooder that looks like many other quick-bite eateries but for one major twist, spelled out on the sign out front just below the misspelled name: plant based eats.

That means that it’s entirely meat free. So the chicken that my lunch companion chose as an add-on to the Humbl Bowl should have been listed as “chicken” on the menu. Or it could have been purposely misspelled, you know, like sushi bars spell krab with a k when it’s really surimi.

But even surimi wouldn’t fly here, or swim, if you will. So I was pretty sure the chicken wasn’t chicken. But I have to say the look and taste were legit even if the texture was the tell. Still, it was a good add-on, though honestly the bowl would have been filling enough with the tandoori spiced cauliflower, nutty brown rice and cool yogurt sauce.

The Humbl Burger that I chose for my entree wouldn’t have fooled anyone. It was mealy-textured and overwhelmed by the bun. The menu claims that it’s comprised of 17 ingredients, nothing that resembles the taste of ground beef.

But if you’re going plant-based in your diet – vegan, essentially – do you want your food to mimic animal flesh? I suppose some people do.

Whatever. I won’t argue the benefits of eating a more vegetarian diet. It’s more healthful for the planet as well as the eater.

The menu is designed by Matthew Kenney, a Food + Wine Magazine Best New Chef designee and, according to the website, “one of the world’s leading plant based chefs,” although judging from the accompanying picture he himself is meat based.

Even though we were asked if the food was to go or to eat there, our dine-in order was served as if we had asked for takeaway. Still, all of the staff were friendly and cheerful.