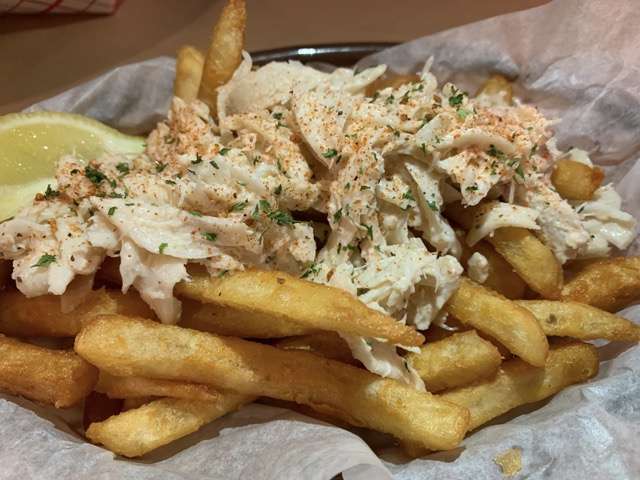 Hook & Reel has set up shop on the west side of town. It’s from a restaurant company that started in Lanham, Maryland, but is now based out of Flushing, N.Y. Any restaurant based in a place called Flushing is just asking for it if it doesn’t serve good food.

Luckily, H&R does serve good food – seafood, in case you hadn’t already deduced – in a casual and relaxed atmosphere.

The menu is Louisiana accented. In fact, the sign out front declares “Cajun Seafood & Bar.”

My companion and I started with an order of Hush Puppies and something called Crabmeat Fries.

The Crabmeat Fries were just that: A stack of french fries topped with a generous amount of sweet crabmeat.

My friend chose the Soft Shell Crab dinner, a gutsy move just two weeks after having the same thing at Galatoire’s in New Orleans. Were they the same? No. But these were perfectly fine, and a bargain at $19 for two.

And then there was the bag o’ seafood. I went for the Pick Your Catch option and selected crawfish and shrimp. Also inside the bag were new potatoes and a chunk of corn on the cob, plus whatever sauce you choose.

All of this comes to the table in a huge puffed up bag. Then the server shakes it all up so that everything gets coated real good. It’s basically a seafood boil in a bag. And you eat it out of the bag with its sides rolled down instead of dumped out onto a table.

Thankfully, there are not only bibs provided but plastic gloves, as well, so you can just dig in and get all messy with your food. And there’s a big bucket on the table for your discards. Great fun.

And it was all cooked nicely, too. I especially liked the shrimp, which were tender-firm and tasty.

I enjoyed the laidback but attentive service and was impressed with our server’s menu knowledge.

In fact, I enjoyed everything about my visit. The people are friendly, the atmosphere relaxed and the food is good. I guess I’ve been reeled in.