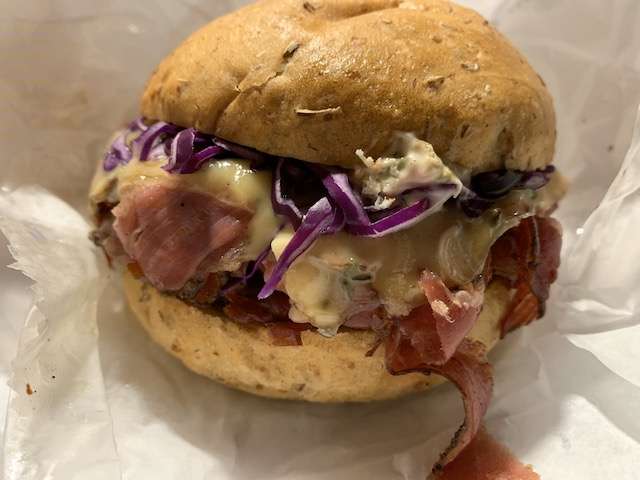 I fancied a meat sandwich the other evening, so I stopped in at Hinckley’s Fancy Meats, a snout-to-tail butcherie at East End Market.

Matt Hinckley is the eponymous owner of the small stand. According to his bio on the website, he has spent a considerable amount of time traveling the world cooking in an array of kitchens, from a beachside cafe in Nicaragua to a Michelin-starred restaurant in New York City. It was in Nicaragua that he witnessed a man slaughter and butcher a cow on Christmas Eve and then distribute all of it to local residents to use in their Christmas meals, leaving nothing behind. That “zero waste” philosophy guides him in his meat market.

The menu is larger than the kiosk space should accommodate. There are charcuterie, sausages, smoked meats and bone broths.

And most of the products are available in sandwiches. Well, not the bone broths; the breads get too soggy.

I went directly to the Pastrami on Rye, which features grass-fed pastrami – that is, the cattle is grass fed – with a stack of red cabbage and melted havarti cheese on a soft seedy bun. The pastrami had an almost baconlike texture (and taste) and was well seasoned and condimented with horseradish and Russian dressing. Given the snout-to-tail manifesto I wondered if Hinckley uses the navel cut rather than brisket to make his pastrami. The navel’s got to go somewhere, it might as well end up as delicious pastrami.

I ordered my food to go and was delighted when I unwrapped the sandwich and found big greasy stains.

I also got a jar of Duck Liver Paté, which was impossibly smooth, a velvety mousse of liver, butter, heavy cream and a touch of cognac.

You can find less expensive sandwiches in town – the pastrami was $15; others are $14 and $13 – and you might get a pickle or some chips, too. But given the fine quality and admirable policy of sustainability, the food here is a bargain.