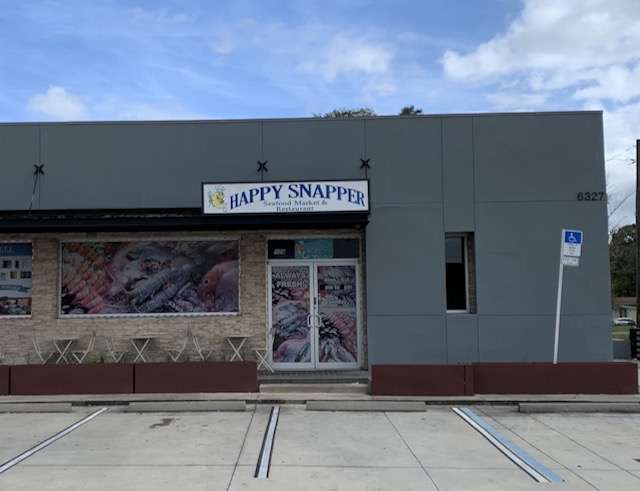 I take it as a generally positive sign that after I order a bowl of clam chowder the first thing the cook does is grab a handful of fresh clams.

That’s what happened when I stopped in for lunch at Happy Snapper, a seafood market with a hot food menu in the Pine Castle area south of downtown Orlando.

It’s a small shop and the inventory of fresh fish, displayed in the counter on crushed ice, is limited. Don’t expect to find the array of a Lombardi’s or Bar Harbor. It’s more the type of place where you ask, “What’s fresh,” and plan your menu from there rather than go expecting to find a certain fish or shellfish for your evening’s dinner.

The menu is compact, as well, but offers a good representation of fruits of the sea.

As I said, I started with a bowl of Clam Chowder. It featured a velvety velouté, mildly flavored and seasoned, with two of those clams plucked from the display case floating, wide open, on top. The rest of the clams and all other ingredients were finely chopped as to be almost unnoticed. No big hunks of potatoes or other unnecessary fillings, and the little bag of oyster crackers served with the soup went unopened. Just a rich, smooth bisque of clamness.

I followed the chowder with a grouper sandwich, which featured a sizable fillet, lightly seasoned and deftly grilled and served on a fresh hoagie roll with onions, tomato and a leaf of romaine. I appreciated the tartar sauce – I love tartar sauce – but it wasn’t needed. The fish was moist and flaky.

Don’t equate the small, unassuming shop as a place for cheap eats. You may expect to pay appropriately for fresh seafood. The clam chowder was $8.50 and the sandwich $15.99.

The shop was staffed by two people, a young woman who greeted guests and cheerfully offered them menus, and the cook, a mostly silent man who went about his job efficiently.

While I was waiting for my order, which I ate while sitting at a counter overlooking the parking lot, a group of women came in. One woman said she didn’t need to look at the menu; she always got the same thing: the salmon burger, it turned out.

I’ll have that the next time.