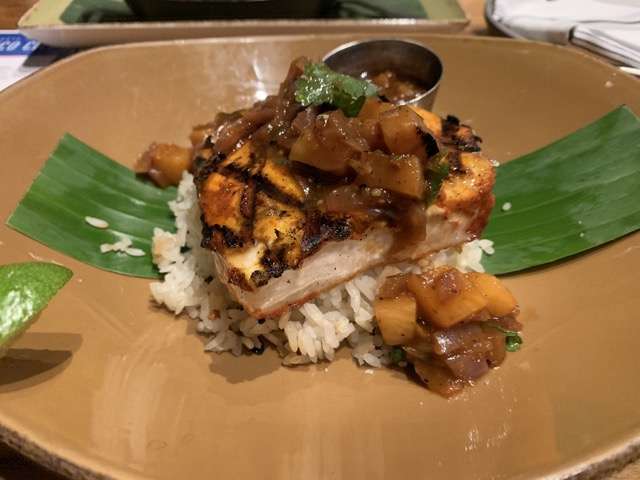 The first of the seasonal entrees we sampled was the Swordfish al Pastor, grilled fillets seasoned with garlic, achiote and red chile and topped with a smoked pineapple salsa heated up with a bit of chipotle. Photo: Scott Joseph

I was surprised when I was told that Frontera Cocina, the Disney Springs restaurant from chef Rick Bayless was celebrating its third year.

I was even more surprised that the man who told me was Bayless himself.

It seemed like no more than a year ago that Bayless, the well-known Chicago based chef and restaurateur, was on hand to open the Disney Springs venue. I figured that would be the last we’d see of him in Central Florida. Certain celebrity chefs are known for putting their names on restaurants and then practically forgetting where they are. I’m looking at you, Todd English.

But Bayless, I’m told, is at Frontera Cocina at least once a quarter, usually to help roll out a seasonal menu.

We started the evening with a seasonal appetizer of Shrimp Ceviche Tostadas, which featured crisped corn tortillas with Florida pink shrimp on a bed of pureed avocado. The shrimp had a citrusy flavor and it was all quite refreshing.

I liked the Swordfish al Pastor, grilled fillets seasoned with garlic, achiote and red chile and topped with a smoked pineapple salsa heated up with a bit of chipotle. Very nice.

Here’s something else that surprised me: Bayless and his Orlando team, headed by executive sous chef Christian Torres, are not dumbing down the spicing of the food to appeal to — or to not offend the palates of — the general dining public. The heat of the salsa was dominant but not inappropriately so.

I’ve never found the Frontera Cocina ambience very appealing. It feels a bit too much like a corporate lunchroom.

But the food is definitely first rate — even better than when it first opened — and it’s always nice when the CEO is in attendance.