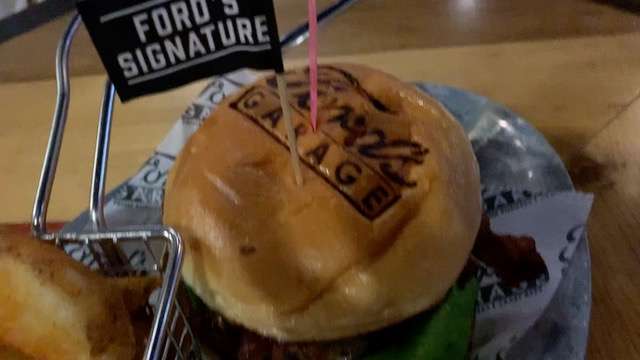 Ford’s Garage is a burger and beer brand born out of Ft. Myers and now headquartered in Tampa. You’d think Michigan, right? But there is a natural connection: Henry Ford had a Winter home in Ft. Myers, less than a mile from where the first Ford’s Garage restaurant opened in 2012 (Henry did not attend).

Nearly all of the locations, just under a dozen so far, are in Florida, the newest in Orlando.

As you might expect with a garage-themed restaurants, Ford’s is tricked out in a design that might be classified as early grease monkey. But there are a lot of nice details.

Such as the hose-clamp napkin rings, the napkins themselves being grease rags.

Instead of windows there are garage doors, naturally. Out front you’ll find old-style gas pumps and a couple of vintage cars; another Ford, its wheels turning, is jacked up over the bar. Someone had a lot of fun with all the gews and gaws hanging about. It’s fun and stops just short of being over the top.

As I mentioned above, Ford’s Garage is a burger and beer joint. Actually, to cite the subtitle: “Prime Burgers, Craft Beer.” About that prime assertion: Nowhere on the menu could I find the letters USDA — black angus, yes, but not USDA Prime (angus is a breed of cattle, it is not a quality grade).

That said, the burger I had on my visit was really quite good. It was the Ford’s Signature, a half-pound patty, thick, yet grilled just right to a juicy red medium rare, topped with thick-sliced rashers of bacon, cheddar cheese and a barbecue sauce laced with bourbon. The meat had a nice smoky charred note. Neither my companion nor I cared very much for the fries, which were thick cut and stubby.

Ordinarily, a concept like Ford’s Garage probably wouldn’t be worth a mention. But its Florida origin and apparent ambitions to grow make it worthwhile. Not to mention that it makes a pretty good burger, prime or not.