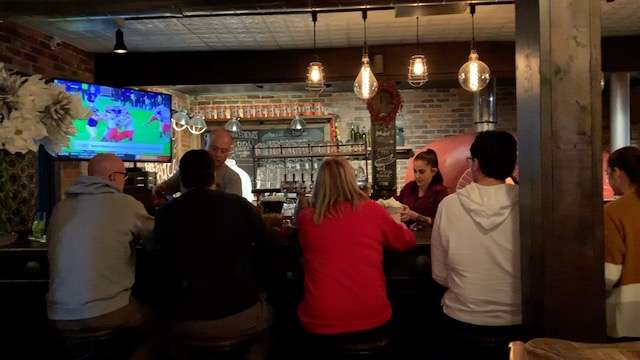 The people at F&D Kitchen in Lake Mary have opened a pizza concept in the unofficially named Hourglass District on Curry Ford Road.

F&D Woodfired Italian Kitchen offers a cozy atmosphere, an exuberant staff, and a well-thought-out Italian menu that goes beyond basic pizza, with pastas and even full entrees.

Though open only four weeks, the restaurant already has a comfortable homeyness about it. My companion and I were seated at one end of a six-person hightop that doubles as a communal table.

We started with an appetizer of Meatballs al Forno, dense orbs fashioned out of sausage and various spices in a pulpy puddle of marinara and topped with grated pecorino.

We were gifted with the Pignola ala Porchetta, a salad of spicy arugula on top of a platform of thinly shaved porchetta tossed in a sherry vinaigrette and sprinkled with toasted pine nuts. I don’t usually order salads but this is one I would have again.

I ordered the Due Carni pizza, with sausage (uno) and pepperoni (due) plus mozzarella and just a soupçon of tangy sauce. It was cooked in the imported oven and had wonderful scorch marks on the bottom of the crust. It’s a Neapolitan style pizza, so the edges of the crust are a bit thicker and puffed out. But it was all cooked through and not at all doughy, a pleasure to eat even without the toppings.

My friend had the Wild Mushroom Pappardelle, the wide noodles cooked al dente and tossed with meaty chunks of mushrooms and bits of spinach in a porcini cream sauce that clung to the pasta.

I’m no longer skeptical about the future of the Hourglass District (though the city’s Main Street program would rather you call it West Curry Ford). And you can now count me as a fan of F&D. It obviously cares about the quality of its food and the enjoyment of its guests.