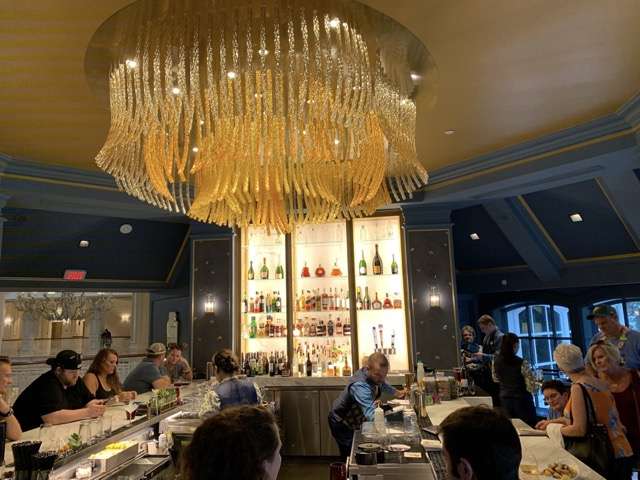 Wonderful news: The drabbest bar on Disney property, the miserable Mizner’s Lounge, is no more, and Enchanted Rose has taken its place – and it has food.

This being Disney, even the cocktails, which were curated by master sommelier Brian Koziol, have a story. Or at least that’s the case for two of the featured cocktails that are prepared tableside.

One of the cocktails is called Love and the other is called Envy, two emotions apparently on display in Beauty and the Beast, the Disney property that inspires Enchanted Rose.

Each ingredient in the two cocktails was chosen for its thematic appropriateness. For example, the Envy cocktail has Chartreuse and green apple puree – you know, green with envy – and Angostura bitters – get it? The Amour cocktail is made with Grey Goose Vodka, because what’s not to love about that?

The food served at the Enchanted Rose comes from the Citricos kitchen next door. They’re not entrees but they’re above your basic bar food.

Espelette Pepper-spiced Shrimp were wrapped in Serrano ham and served with a lime gelée.

Octopus a la Plancha was served with tomatoes and fingerling potatoes with a black olive aioli.

And Truffle Fries go beyond the usual spritz of truffle-scented oil with actual shaved black truffles on top.

The Enchanted Rose is a vast improvement over Mizner’s. I like the openness and the understated stylishness.

I still recall being knocked over by the grandness of the Grand Floridian when it first opened more than three decades ago. Enchanted Rose is the bar it has always been missing.