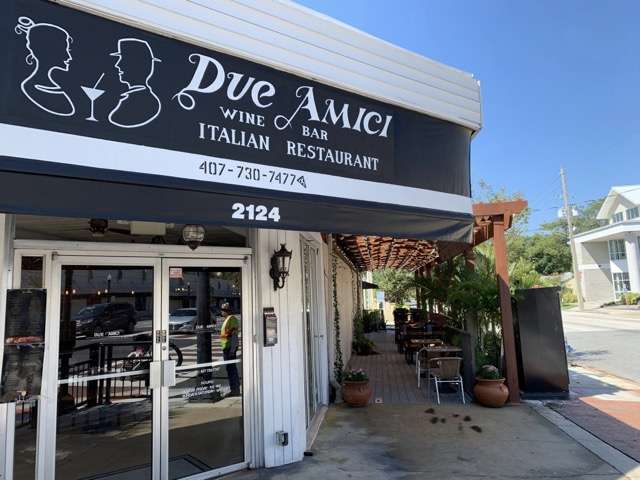 The first time I visited Due Amici, a new Italian restaurant in College Park, it didn’t quite have all of its stuff together. It also didn’t have its beer and wine license. So one of my dining companions hiked over to Publix and brought back something for us to sip on. In fairness to DA, it had softly opened only a week earlier.

Two months later, its stuff is still a bit disarrayed, though the beer and wine issue has been resolved. But I was a tad flummoxed when I arrived at noon ahead of my lunch companion to find the doors locked, even though it clearly stated out front that the restaurant opened at 11 a.m. What’s more, I could see someone inside with her back to the door, and she did not respond to my knocking.

So I called, and the person who answered (the same one who didn’t answer my knock) was startled to learn that the doors were locked. (That might have something to do with a complete lack of business the first hour.) The music was a tad loud, which might have been why she couldn’t hear me knocking.

But even if the operation seems a bit scattered, the food is good. That was true even on that first visit in the early days.

We had the Meat Lover’s, which was chockful of ham, bacon, crumbled sausage and pepperoni. The crust was created in the image of a classic New York style pie, thin crusted with poofy edges, the dough with a good elasticity. Not too much sauce. Very nice pizza.

So it followed that the calzone one of my guests ordered was good, too. The same dough but rolled up with the fillings inside, and a side of marinara for dipping. The sauce was pulpy and sweet with just a bit of a spicy kick at the end.

The Meatball Parmigiana sub that I ordered on my lunch visit needed some of that marinara, though the balls were nicely formed, dense and well seasoned. Just a tad dry. I eventually got some sauce once my server had a chance to check back with us.

Due Amici occupies the space that most recently was held by Kingfish Bistro/Grill. It’s a small corner storefront, sparsely decorated inside, with a pleasant-looking patio on the Princeton Street side. (It looked pleasant, but I’m not sitting outside until at least November.)

I can’t say whether the staff of Due Amici will ever get its operational stuff together, but they seem to be doing just fine with the food.