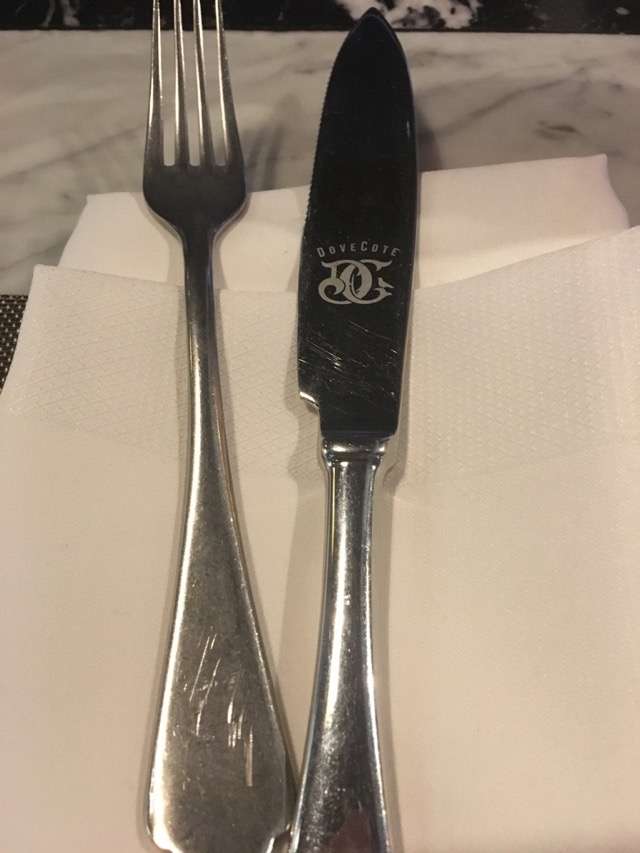 It doesn’t quite seem possible that DoveCote, the postmodern French brasserie in downtown Orlando, has been open just over two years. It started out well enough, though a few faux pas warranted a more cautious recommendation.

All caution is hereby removed. I returned to DoveCote one evening last month and found that the restaurant has settled into a quiet thrum of efficiency; and the kitchen, still under the direction of chef and co-owner Clay Miller, is producing more reliably fine recreations of French classics. And, not incidentally, at a price point that is reasonable and affordable.

Steak Frites, a staple of many French bistros, may be one of the more recognizable dishes on DoveCote’s menu. But Miller’s use of hangar steak, so tender and sliced into medallions fanned across the plate, elevates it above the mundane. The meat had a maitre butter melting atop (no sign of the bordelaise the menu promised but it wasn’t missed). The fries were light and crispy.

Wild Burgundy Snails got a more creative treatment. They were served with gnocchi in a foamy sauce of carrots and coriander, a much more enjoyable dish than the staid Bourguignon method.

Provencal Braised Squid, despite its regional designation, was also more creative than traditional, as noted by the tomato sofrito it was served with. Fried herbs and olive oil completed the dish. A very nice thing to happen to squid.

Miller steps outside of France altogether with the Eggplant Escalavada Dip, which is sort of like babaganoush with a Spanish flair. Served with grilled ciabatta — even Italy is represented! — the dip had a wonderful elasticity and an enjoyable smoky flavor.

The decor seems less jarring than it did back in the summer of 2016. What had once seemed like a studio where Klimpt, Chagall and Miro had a paintball fight now seems like the perfect setting for the menu. (You’ll remember — or should now forget — that for the previous three decades, the restaurants that occupied this space used the sandstone walls and high ceilings that came as standard issue with the bank-anchored skyscraper. As long as you don’t look past the doors leading to the Bank of America lobby, you’ll feel transported.

I’ve been saying for a while that downtown Orlando is set for a restaurant renaissance. I still think so. And when the Dr. Phillips Center is completed, the downtown UCF campus and the Creative Village open, there will be new denizens seeking good restaurants. DoveCote will be there for them.